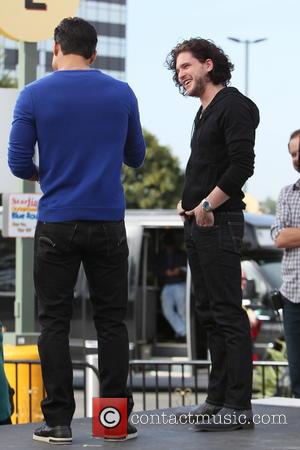 Game Of Thrones star Kit Harington is convinced he has stumbled upon Iceland's best-kept naughty secret as the locals treat foreigners to shark meat they have urinated on.

The actor, who plays Jon Snow in the cult fantasy series, films most of his scenes in frosty Iceland and admits he has come to love the wintery landscape and the people, but they take a little warming up to, especially once you have sampled the 'delicacy' they offer up to visitors.

He explains, "I swear it's a joke that they play on tourists... They have this delicacy; it's shark, and they bury it... They let it rot, but before they let it rot, they all stand around and urinate on it. And then they leave it there for about three months and they serve it to wandering film crews and the like.

"As you're eating it, they tell you what's happened to this shark. And they're laughing - and they're not eating it!

"You know what it tastes like? P**sed on shark."

However, the odd ritual hasn't soured his love for Iceland: "It's beautiful scenery; it's an amazing country (but) the people are bats**t nuts... They come across as quite sort of calm and Scandinavian and then you get them a little bit drunk... and then you see the real side. They're crazy."