Read our The Chronicles of Narnia: Prince Caspian game review on Xbox 360 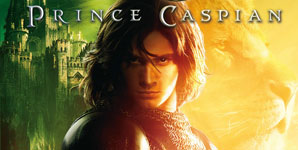 Game players who long to spend their days in Narnia will be able to revisit as old heroes return 1,300 years later and a new hero must rise. Disney/Walden Media's The Chronicles of Narnia: Prince Caspian video game is released alongside the new movie and we find ourselves hacking and slashing our way through Narnia again.

Developed by Traveller's Tales, The Chronicles of Narnia: Prince Caspian for home consoles and Windows-based PC takes players throughout Narnia and includes a level, which is unique from both the novel and the film. The level, which is set between the events of "The Lion, The Witch and The Wardrobe" and "Prince Caspian," takes place at the castle of Cair Paravel and tells the story of how Narnia fell to the Telmarine hordes. In "Prince Caspian," Cair Paravel is seen only as abandoned ruins the Pevensies discover hundreds of years later.

"The Chronicles of Narnia: Prince Caspian game is an epic adventure that provides memorable experiences as it takes players throughout the familiar areas of Narnia from the second film,". "Fans of the films and books will re-live the excitement, the battles and the memorable characters while going beyond the events of the film."

The Chronicles of Narnia: Prince Caspian for Nintendo DS will be a completely new gaming experience from the console and PC versions and is being developed to take advantage of unique DS functionality. This action-oriented, turn-based RPG game will let players explore the land of Narnia controlling more than 10 different characters. The game's RPG and puzzle game-play includes other exciting features such as, touch screen gesture controlled attacks, activating the DS microphone to sound the game's horn during battles, as well as an option to turn the DS on its side for storybook narratives. Prince Caspian for the Nintendo DS is being developed by Fall Line Studio, the Nintendo platform-dedicated development studio of Disney Interactive Studios.

The scenes were shot on the film set in Prague, Czech Republic, during principal shooting and feature dialogue revealing plot based on the events of the book, game and film. The creation of the live action content was directed by Andrew Adamson, the film's director. The two original scenes are part of 18 live action moments in the game, which include 16 excerpts from the feature film.

"The special filmed content that is exclusive to the video game provides insight into Narnia and the events around the 'Prince Caspian' story like nothing else," said Andrew Adamson. "With movie fans' enthusiasm for unique experiences in video games as well, these scenes are ideal to complement the 'Prince Caspian' game's action."

If you are a huge C S Lewis fan, a fan of the Narnia movies or you simply want a great fantasy game The Chronicles of Narnia: Prince Caspian is worth a look. Slick graphics, lots of cinematic input and a great score all help to make this Traveller's Tales Developed title definitely worth a look.