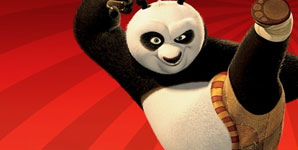 Watch videos for Kung Fu Panda, The Game - From Activision

Based on the upcoming feature film from DreamWorks Animation, this pandalicious game allows you to embark on an epic, action-packed adventure. Master the specialized Kung Fu fighting styles of Po the Panda, the unlikely hero, his teacher Shifu, the legendary Kung Fu masters, the Furious Five: Monkey, Tigress, Viper, Mantis and Crane. Through 13 legendary levels from the movie and beyond, and spanning land, water and air, work your way to become the Dragon Warrior and defeat the ultimate enemy, Tai Lung, as they battle a variety of foes, overcome dangerous obstacles, navigate multi-tiered environments and solve challenging puzzles.

Featuring a deep variety of gameplay, unique co-op and competitive multiplayer modes, collectibles, and a host of character upgrades, the Kung Fu Panda video game provides an experience gamers of all ages will enjoy.

'Prepare for awesomeness' this summer as you become a Kung Fu master with the release of the Kung Fu Panda video game on June 27.

For your chance to experience the Kung Fu awesomeness and download the demo of the game, visit

Kung Fu Panda the movie (cert PG) is at cinemas everywhere from July 4. To find out more about this pandalicious movie and for cool downloads visit