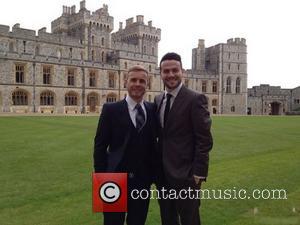 Picture: Gary Barlow tweet this pic with the following caption,'Cracking day at Windsor!' 08.05.12 Supplied by WENN does not claim any ownership including but...

British pop star Gary Barlow was left sweating during a meeting with Queen Elizabeth II when the monarch bombarded him with awkward questions about her upcoming Diamond Jubilee concert.
The Take That star has been tasked with masterminding the glitzy event at Buckingham Palace next month (Jun12), and he's lined up a dazzling array of showbiz superstars including Sir Paul MCCartney, Sir Elton John, Sir Tom Jones, and Dame Shirley Bassey.
He was asked to meet with the Queen earlier this month (May12) to run through the show's itinerary - but Barlow has confessed he was on edge during the conference as the royal tested his organisational skills with a string of tricky questions.
The singer tells U.K. talk show host Graham Norton, "The Queen is absolutely delighted with the whole line-up. Only a couple of weeks ago I got the job of presenting the whole plan of the concert to her and I'd learnt everything about the gig, there's not a question she can throw at me that I'm going to falter on.
"And she said, 'So all that equipment, how long is that going to take to dismantle?'. At this point I'm guessing, so I say 'About six or seven hours,' and she said, 'So, the concert finishes at half ten at night, which means you will be doing that all night at the front of the palace where my family lives.'
"At this point I say, 'Moving on Your Majesty, this is the royal box, this is where you will be sitting, and she said, 'How am I going to get there?'. It was something else I didn't know the answer to! She is incredible for her age and very, very smart and excited about the whole weekend."