Gary Barlow made a surprise appearance at a Robbie Williams concert last night (13.10.10), where they performed their duet 'Shame' together. 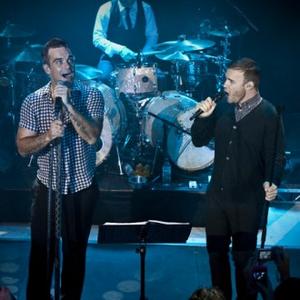 Gary Barlow made a surprise appearance at a Robbie Williams concert last night (13.10.10).

The Take That singer joined his bandmate - who has recently rejoined the group after originally quitting in 1995, a year before the boy band split for the first time - onstage to perform their song 'Shame' from Robbie's new greatest hits album.

An onlooker at the âMagic Presents Robbie Williams with Barclaycard Unwindâ - for Magic 105.4 event said: "It was such a surprise, we hardly thought Robbie could pull out any more hits after 'Rock DJ' and 'Angels', then all of a sudden Gary came on and it was amazing to see them both there onstage together, reunited.

"I saw the last Take That tour, The Circus, without Robbie, and the Atmosphere was amazing, but I think when all five of them appear together again it will be the most incredible show ever, I'll shout so loud I'll probably lose my voice - I can't wait."

Robbie's hour long set at the trendy Supperclub venue in London's Notting Hill also included his hits 'Feel', 'No Regrets' and 'Come Undone', among others and was attended by 300 lucky competition winners and VIP guests including Geri Halliwell.