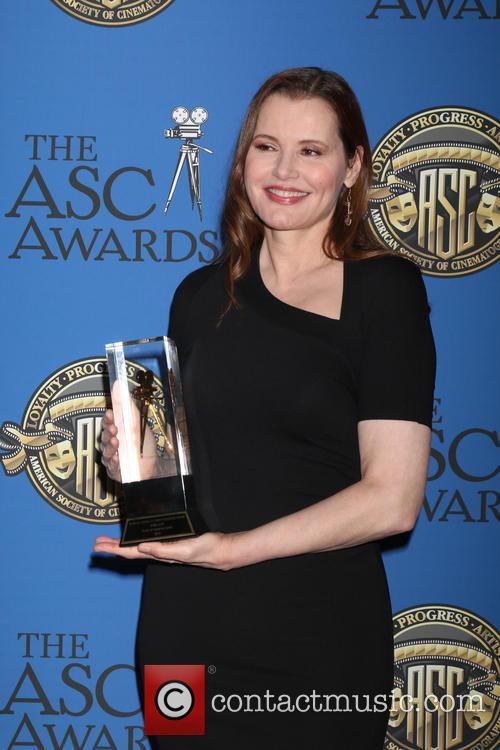 Davis reckons that the next decade will see a much faster rate of progress towards equal representation of men and women on the big screen.

Geena Davis, the actor and founder of a research institute into the role and prominence of women in the media, believes that it won’t be much longer before Hollywood makes drastic improvements in the number of female characters in movies.

Davis, 59, who is most famous for her roles in Thelma And Louise, A League of Their Own and her Oscar-winning performance in The Accidental Tourist, has spent many years lobbying producers, directors and studios to push for more female characters and castings. Making the keynote address at a panel at the British Film Institute in London about gender in the media, she made a confident prediction for the future. Geena Davis was speaking at the British Film Institute

Could our two heroines ride again for a special anniversary road trip?

It’s been 25 years since Geena Davis and Susan Sarandon made the ultimate female road trip movie, Thelma and Louise, so what better way is there to celebrate this milestone than by taking the pair back out on the road? Geena Davis and Susan Sarandon in Thelma and Louise

Davis has said that she and co-star Sarandon are currently thinking of things to do to celebrate a quarter of a century since the film’s release.

Continue reading: Will Geena Davis And Susan Sarandon Be Bringing 'Thelma And Louise' On The Road For 25th Anniversary?

Continue reading: Michael Keaton May Reprise His Role As The Eponymous Bio-Exorcist In 'Beetlejuice 2'

Where Does 'The Lone Ranger' Rank In List Of Biggest Movie Flops?

Continue reading: Where Does 'The Lone Ranger' Rank In List Of Biggest Movie Flops?

Seth MacFarlane’s Oscars hosting stint was not taken lightly by anyone that associates themselves with the concept of feminism. From his ‘We Saw Your Boobs’ song, detailing a number of talented Hollywood actresses who have dared to unveil their breasts on screen, to his joke about actresses deliberately catching the flu so that they can fit into their Oscars dresses, MacFarlane’s attempts at humour were not well-received by a huge section of the awards audience – both at home or at the ceremony itself.

Former Academy Award winner Geena Davis has been vocal in her disapproval of MacFarlane’s sexist hosting stint, E! Online reports. She took the opportunity to speak out about women’s rights and unequal treatment, at the California Commission on the Status of Women and Girls. Addressing the California State Assembly, she said “It's a shame that that triumph was enveloped in an awards ceremony containing disrespect for women… But it helps illustrate how tone-deaf we can still be regarding the status of women.” Following a recent episode of 'Commander in Chief''s depiction of particular city, ABC has come under fire from the city's residents. ABC was forced to apologise to the citizens of Hyattsville, Maryland, a suburb of Washington DC in Prince George County, after the episode in question took certain liberties with the crime rates in the area. A League Of Their Own Movie Review