The Screenwriter Behind New Movie Suffragette Was Delighted To See The Film's London Premiere Disrupted By A Red Carpet Protest, According To Actress Geena Davis. 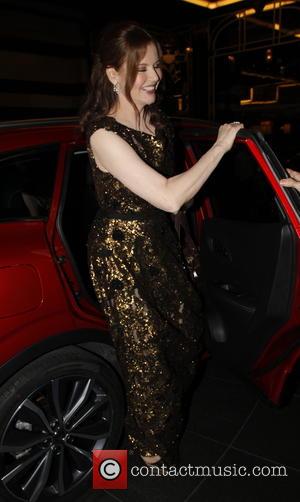 The glitzy event in the U.K. capital on Wednesday (07Oct15) hit headlines after a dozen women used it to demonstrate against planned cuts to domestic violence services in Britain.

Suffragette charts the early struggles in the battle for women's rights, and its writer Abi Morgan thought the protest was perfect for the event, according to Thelma & Louise star Davis.

The actress is the founder of the Geena Davis Institute on Gender in Media, which aims to raise awareness of sexism in Hollywood, and she spoke to Morgan about the premiere protest.

Davis tells Sky News, "I think (Suffragette is) fantastic. I saw the movie a couple of weeks ago... and I think it's just wonderful and certainly something that we need to learn about and know more about...

"I did hear about (the protest)... The writer of the film was talking about the protest and said she was very much behind what they were doing. (She) thought it was important that one message of the film is 'deeds not words', and this is the perfect demonstration of that."