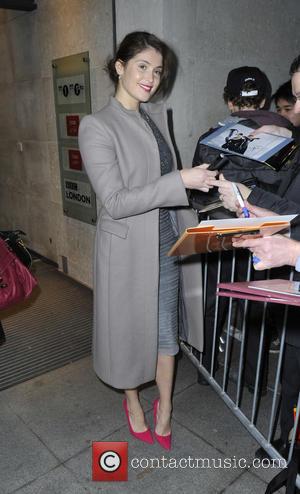 British beauty Gemma Arterton isn't as sickly sweet as she looks. In fact, she's really, really hard. We're not joking: she punched a tramp... in the face!

While that sounds fairly ruthless, speaking to Graham Norton on his BBC show, she explained her reasons behind it. "I was in one of those ATM cash machine rooms and there was a tramp in there. He kept looking at me and then he grabbed my bum really hard" she said. "I turned round and properly punched him in the face. I then realised I'd punched a tramp in the face so I ran. Thank God he didn't punch me back... I actually felt quite bad about it."

She's currently starring in an action packed blockbuster, Hansel & Gretal: Witch Hunters which trained her up enough for the punch to be pretty hardy. "It's one of the reasons I wanted to do the film because I've always wanted to punch people. It was fun," she said about the action and violence in the film. "I had to do lots of training because I had never done anything like it before and I loved it, absolutely loved it."

Being groped by a tramp isn't the only time she's found herself in a sticky situation, although before she managed to calm everything down with a dose of her dulcet tones. While she worked for a karaoke club before finding fame and fortune she would "occasionally... get threatened." Explaining that she elaborated: "I would get asked for "My Way" 10 times a night and when I said no, this guy pulled out a crowbar and went for me. Honest Dave, the owner, saved me and said that if that happened again I should sing "My Heart Will Go On" by Celine Dion because it really chills everyone... [F]rom then on when it got a bit fraught he would say, 'Gemm, do Titanic'." (Independent) Gemma Arterton's not as sweet as she looks