'Their Finest' follows a female screenwriter who struggles to find respect within her workplace in WW2.

War films remain one of the most popular movie genres out there, and yet so few of them are telling the stories of the women left behind. We can appreciate now that females had roles of utmost importance during the First and Second World Wars, but as Lone Scherfig's drama 'Their Finest' (in cinemas April 21) shows, there was little appreciation at the time. Sam Claflin and Gemma Arterton star in 'Their Finest'

As we live in an era where gender equality is of the utmost significance to men and women everywhere, 'Their Finest' presents a portrait of a female screenwriter named Catrin Cole whose skills are only desired as filler for a wartime propaganda movie - or 'slop' to put it in her employers' oh-so-sensitive terms.

Set in 1940s London, the film is based on the novel 'Their Finest Hour and a Half' by Lissa Evans and paints an extremely accurate picture of the plight of female writers at the time, loosely inspired by the Welsh playwright Diana Morgan. A tired Catrin pours over an exhausting script

Where was the credit?

'Originally from Wales, Diana was hired by Ealing to write the "nausea" or slop for the female parts in their male dominated movies, but very soon with so many movies being made that had a more female angle, she was writing much more than just dialogue', producer Stephen Woolley explained. 'She got credit for films she hardly wrote and no credit for some of the movies she completely re-wrote.'

Watch the trailer for 'Their Finest' here:

It's shocking to reflect on just how women were treated during this time; dismissed as talentless spare parts not deserving of merit or esteem. Even after women had taken over more serious occupations like the running of factories, repairing engines and vehicles, welding, riveting, working as ambulance drivers and air raid wardens while the male workers were at war, they were shunted back into their boxes upon the soldiers' return and expected to go back to their daily domestic duties. Trade unions even denied women equal pay for their manual labour.

While it would be easy to make a film about muscly women of the time going to work in big boots and overalls like Rosie the Riveter, there is a profundity about telling a story about someone who is not that robust character, but is much more the meek and mild-mannered woman of the day. 'I was very impressed to see a story that focused on a woman who is not necessarily a showy character or even feisty or strong, she's just her, [and] quite sort of gentle', Gemma Arterton, who plays Catrin, said at the BFI London Film Festival. 'It's obviously sexist but funnily enough I don't think Catrin is aware of it', she continues. 'I think at that time people just accepted [the situation]. We hadn't had the feminist movement yet, in the 1940s you just got on with it, I imagine. What I like about Catrin is she is a feminist and she doesn't know it yet.'

It's this idea of 'casual sexism', where it was so normal to pay women less than men for the same job that it wasn't even questioned, that makes 'Their Finest' so significant. It's so relevant in a world where women are still underpaid for certain jobs including acting and filmmaking.

Even at a time where we have Academy Award nominated and winning female filmmakers like Ava DuVernay, Kathryn Bigelow and Sofia Coppola, there are still so few roles for women in the movie industry compared with their male counterparts, but there is progress. 'Their Finest', thankfully, doesn't go into hypocritical territory as it has been both directed and written by women (Lone Scherfig and Gaby Chiappe respectively). Bill Nighy also appears opposite Gemma Arterton in 'Their Finest'

When it comes to writing about women in war specifically, we still have a long way to go. This seems ridiculous now that women are just as able to go to war as men are, but apart from recent films like 'Eye in the Sky' starring Helen Mirren as Colonel Katherine Powell, the upcoming 'Megan Leavey' biopic, and 'Billy Lynn's Long Halftime Walk' with Kristen Stewart, there are still astoundingly few depictions of females within a war environment.

'We wanted to make a film that was not just the female experience of becoming a writer, but a female experience of being in the Blitz in London', said Woolley. 'Coping with a society that was on the brink of changing from being so male-dominated, to being a society where women weren't just tolerated, they were expected to step into the breach and take on male roles in society. Not just in the world of film, but the world around them.' 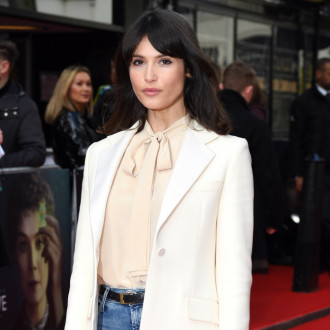