Here's an Essex girl you won't have seen in TOWIE, but to say that this is her fourth album, I would have expected to have heard more about her. 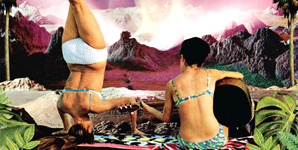 Island Fire combines a multitude of ideas and creative passions, and compresses them into fourteen tracks. Rumour has it that the ideas were first created when Gemma was stranded in Australia during the volcanic ash chaos.

I'd like to say that you could pinpoint Gemma Ray, but Island Sparks seems to flit across musical styles and influences. Whilst many albums rely on a sort of storyboard theme, this doesn't. You could say that she bases her style on the folk/blues, but even those boundaries are blurred. Retro elements of 50's and 60's blues run throughout, giving her work a strong presence when played.

'Bring Ring Ring Yeah' outshines the others. It has real power and a great hook to it. Somehow she manages to retain the innocence, and yet add an addictive rhythm and more dramatic effect. It's a style that really suits her.

'They All Wanted A Slice' has a soothing lullaby charm. It's a creative experiment that has really been pulled off well. The repetitive rhythm is has the power to get right into your head, and you'll find it hard to let it go.

The album ends with a couple of Gemma Ray/Fire tracks. Again, an interesting choice really, and you have to wonder. Why? They're experimental and a little bit childlike, but the album may have more credibility and consistency without them.

I imagine an intimate gig with Gemma Ray to be just perfect. Her style is slightly reminiscent of the Feist age, but she has been able to cut and paste from different influences to make the collage that is Island Fire.

Island Fire has a sweet and light style on the surface of things, but look harder and you'll find a deeper and darker undercurrent. It's a nice quirky concoction of music and storytelling but unless you're already a Gemma Ray, I doubt this will really be a big recruiting drive. It's a shame really because you can't help but like her.