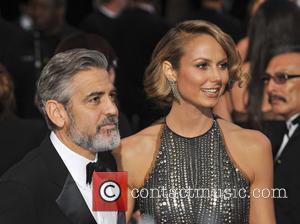 George Clooney and Sandra Bullock are in grave danger in the new space flick 'Gravity' where they play a pair of ill-fated astronauts.

What is the worst way to die? Drowning? Being buried alive? How about getting lost in outer space? Certainly that's Clooney and Bullock's characters' biggest threat in the new teaser trailer for 'Gravity' when they venture out on a mission to the stars and their space shuttle gets ripped apart by falling debris while they are gazing at the earth from outside it. All they can do is hold on to the wreckage and hope that they don't get flown further than they are from the earth where they are near enough to hope someone will rescue them. This heart-wrenching space epic has been directed by Alfonso Cuarón ('Harry Potter and the Prisoner of Azkaban', 'Children of Men') and will certainly make a huge impact on cinematic viewing this year.

The teaser will be drawing in audiences everywhere as it depicts a disaster of such unfathomable hopelessness, that no-one will want to be left in the dark about the ending. The movie is due to be released in 3D on October 4th 2013 with the ominous tagline 'Don't Let Go'.