George Clooney explained his decision to get himself arrested at the Sudanese Embassy last week by revealing he learned from an early age that celebrities are more newsworthy than humanitarian crises. 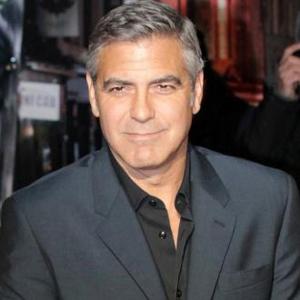 George Clooney has compared himself to Elizabeth Taylor.

The 'Ides of March' actor was arrested for civil disobedience in Washington last week alongside his journalist father Nick and other protesters after a demonstration outside the Sudanese Embassy and George says he learned from an early age that celebrities are more newsworthy than humanitarian crises.

He told 'Fox News Sunday': ''I saw my father in the 1970s doing really good stories and then getting bumped because there was a Liz Taylor story that was going to be out. And the story that he did that had real some social value was going to get bumped.

''I said to my dad, 'Remember how you used to get all your stories bumped by Liz Taylor or something happened in Hollywood?' And he said, 'Yes.' I said, 'Well, let's go to Darfur. And you be the newsman and I'll be Liz Taylor and let's get it on the air.' And he said, 'OK.' ''

George is trying to draw attention to the accusation that Sudan's president, Omar al-Bashir, is provoking a humanitarian crisis and blocking food and aid from entering the Nuba Mountains from South Sudan and admitted he had some close calls when he travelled to the country to film the atrocities.

Speaking about being shown an unexploded bomb by a local man, he explained: ''Well, the bomb one was funny because the guy said, 'You want to see?' And we're standing on top of this bush, he pulls back the bush, and there was a bomb. Oh, there's a bomb.

''And so he kept messing with the bush and I thought, maybe don't hit it with the stick too many times, you know? So, we were glad to get out of there.''