George Clooney has shed some light on a long-term prank he's been playing on Hollywood's elite, in the form of posing as Brad Pitt in letters. 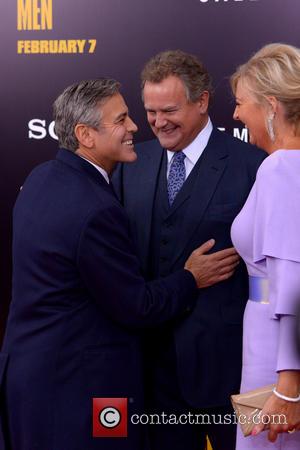 George Clooney has revealed his obsession for sending cards and letters supposedly from his celebrity pals, all began in 2010 at John Krasinski's wedding. The reveal came in light of Matt Damon's discovery that the 'Ocean's Eleven' actor had been posting stationary with his name on to various people in and around Hollywood, yet apparently, Brad Pitt was the first person to fall victim to the practical joke.

While on Jimmy Kimmel's television show on Thursday, 6th February, the prankster - Clooney - revealed that Kimmel had been part of his first prank when they met at a mutual friend's wedding in Clooney's Italy villa. "You sent me a thank you gift card" said Clooney, "it actually said Brad Pitt on it, which set the wheels in motion... I've been sending letters to people as Brad Pitt for four years. Don Cheadle was trying to do the Miles Davis story and I sent him a letter from Brad, because Brad produces films, and I said, 'You know, I'm producing this Miles Davis/Charlie Parker thing and Jamie Foxx is gonna play Miles Davis, but you'd be great as Charlie Parker?'"

Clooney continued to reveal that: "Don wrote me, like, six months later and said, 'Did you do something dirty to me?'" He then went on to talk about how his most elaborate prank was a set of dialogue tapes sent to Meryl Streep - supposedly from Pitt. Chuckling, he announced: "I said, 'To Meryl, I hear you're gonna play The Iron Lady and this guy really helped me with my dialect in Troy'. I never told either of them I did that. Now they know."