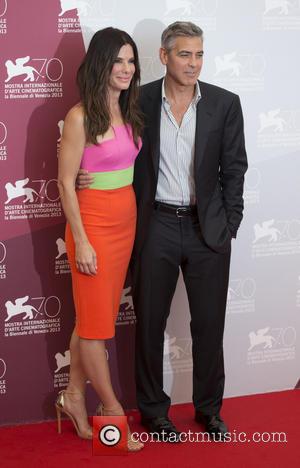 George Clooney and Sandra Bullock's new movie Gravity currently holds a perfect score of 100% on the review aggregating website Rotten Tomatoes after the world's critics jetted into Venice to catch the movie's premiere at the city's annual film festival on Wednesday (August 28, 2013).

The movie tells the story of two astronauts played by George Clooney and Sandra Bullock who get stranded on a damaged space station with absolutely no communications with Earth.

Early reviews have been unanimously positive, with the Hollywood Reporter describing it as a "jaw-dropping space thriller" boasting "breath-catching tension and startling surprise."

Xan Brooks of The Guardian said, "A brilliantly tense and involving account of two stricken astronauts; a howl in the wilderness that sucks the breath from your lungs."

Richard Corliss of Time Magazine agreed, writing "If the film past is dead, Gravity shows us the glory of cinema's future. It thrills on so many levels. And because Cuar?ón is a movie visionary of the highest order, you truly can't beat the view."

Variety's senior critic Justin Chang said: "All in all, it would be impossible to overestimate the difficulty of what Cuaron and his top-of-the-line crew have pulled off, or to guess at the staggering number of decisions that were made regarding specifics of camera placement and movement."

David Jenkins of Little White Lies continued the praise, writing, "It's been 7 years since Children Of Men, and bar the odd production gig, Cuarón has not directed a film since. Yet within the first three minutes of the film is plain to see that no time has been wasted and that the director and his cinematographer were beavering away creating something a bit new and a bit different."

The praise led some bookmakers to half Gravity's odds of winning best picture at the Oscars in February 2014, while the Hollywood Reporter's Scott Feinberg - who has been predicting the Oscars since 2001 - included Gravity as a "major threat" in his Feinberg report this week. Sandra Bullock at the 'Gravity' Photocall In Venice