George Ezra warmed fans with a set of stories and songs about Europe last night (11.07.15) at his Summer Series gig in London. 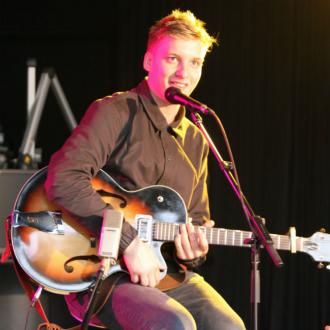 George Ezra took the crowd on a romantic tour of Europe as he sang hits at his Somerset House gig last night (13.07.15).

The 22-year-old singer performed tracks from his debut album 'Wanted on Voyage' - written after he travelled solo across the continent - at the annual Summer Series of concerts held at the London landmark.

Speaking to fans during the set, he said: ''I saw and took a note of everybody I met. And then when I got home I wrote songs from all the nonsense I had written down. Now one of the places I visited was Barcelona. So this song's about that...''

Under the threat of a torrential downpour that thankfully never came, the crowd were swept away in warm nostalgia by the talented storyteller who crooned his popular hits - including 'Cassy O'', 'Benjamin Twine and 'Blind Man in Amsterdam'.

George melted the hearts of fans old and new as he told of getting drunk and missing his train to Budapest - which led to the writing of one of his biggest hits - and revealed that he travelled along out of choice.

He said: ''The reason I went by myself is because my whole life I've been somebody that needs somebody next to me for me to annoy, or for me to be annoyed by. I'm not very good at entertaining myself. So I wanted to see if I could exist for a month by myself, but I also thought it would be nice to have a few faces along the way for me to see.

The star chose an atmospheric close with the darker 'Did You Hear The Rain?'

The Somerset House Summer Series gigs, which are sponsored by American Express, continue this week with performances from artists including James Bay, Kwabs, Belle And Sebastian, and Jessie J.