Apparently, the Maton guitar was lent to Harrison by Barratt's Music Store while his legendary Gretsch Country Gentleman guitar was being repaired. Harrison played the Maton at nearly a dozen concerts during July and August 1963, including a hometown gig in Liverpool.

More: Sgt Pepper to be included in music GCSE syllabus

But this isn't the first Beatles guitar to sell for a high price - another of Harrison's, his 1962 Rickenbacker 425, fetched $657,000 at Julien's Auctions this time last year. That instrument was used when the Beatles made their first appearance on the TV show 'Ready Steady Go!' in October 1963 and on 'Thank Your Lucky Stars' in December that same year.

More: What had the greater impact - the Beatles or hip-hop?

Other memorabilia attracting interest at the Hard Rock Cafe included Elvis Presley's 1967 marriage license to Priscilla, which climbed to $41,000, and the King's 1976 tour bus - a huge 40ft vehicle that went for $263,000. Britney Spears' bra from her 'Overprotected' video also made an appearance, as did an American-flag tank top worn by Madonna, while Michael Jackson's black sequined glove from the HIStory era screamed up $46,875.

There was also one of Britney's childhood leotards, as well as Carlos Santana guitars and Trent Reznor's leather shorts and leggings up for grabs. 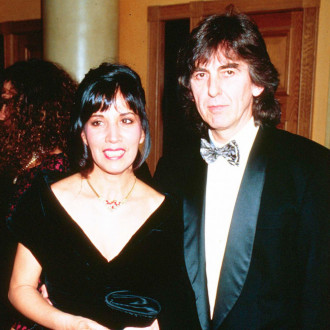