A Week In Movies Featuring: Star Wars, Midnight's Children, The Master, X-Men And Much More

The big news this week is that George Lucas has finally admitted that yes, he did indeed plot out Star Wars episodes VII, VIII and VIX more than 30 years ago. And now that he has sold his Lucasfilm empire to Disney (for $4 billion), the sequel trilogy is finally being made. Episode VII is expected in 2015, and rumour has it that Harrison Ford, Carrie Fisher and Mark Hamill might be back in their original roles. 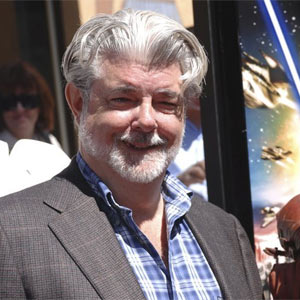 Meanwhile, the James Bond team was spotted in Rome this week, as Daniel Craig, Naomie Harris, director Sam Mendes and series producer Barbara Broccoli attended the Italian premiere of Skyfall, posing for the press at the elegant St Regis Grand Hotel. After last week's record-breaking opening weekend in Britain, the film opens around Europe, Asia and South America this weekend, then in North America on 9th November.

In New York just before Hurricane Sandy hit, a buff-looking Gerard Butler was out promoting his new film Chasing Mavericks, about surfers tackling monster waves. The paparazzi caught up with him in the streets between appearances on various TV shows. He slips through the crowd, but they catch up with him later.

There's a new trailer for The Big Wedding, an all-star farce with Robert DeNiro, Diane Keaton and Susan Sarandon causing havoc around the wedding of a young couple (Amanda Seyfried and Ben Barnes). The film looks very silly, and also potentially hilarious. It opens in the spring.

We also saw a new trailer for Midnight's Children, which Salman Rushdie adapted from his own award-winning novel. The story traces the history of post-colonial India, Pakistan and Bangladesh through the eyes of characters born at the moment of independence. The trailer looks like a full-on epic, with a cast of thousands and colourful Bollywood touches.

Set for release next week, The Master starring Joaquin Phoenix, Philip Seymour Hoffman and Amy Adams is a jagged, meandering exploration of a Scientology-style movement which is equally hauntingly mesmerising and packed with meaty performances.

Marion Cotillard delivers another raw, devastating performance in Rust and Bone, a beautifully made drama about two badly damaged people who adapt to a new life together.

And finally, fanboys and girls were cheering the news this week that Bryan Singer will be back in the director's chair for the next X-Men movie, Days of Future Past. The time-bending thriller, which is a sequel to First Class, will again star Michael Fassbender, James McAvoy and Jennifer Lawrence. Singer directed the original X-Men movie in 2000 as well as the 2003 sequel X2, regarded as the best in the series. He then stepped back to be a producer on the other movies.