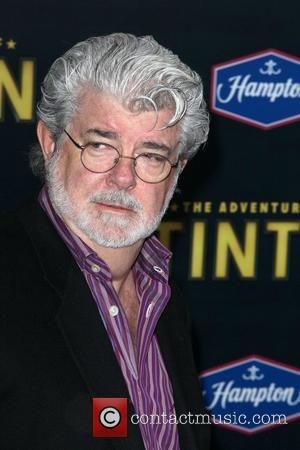 Picture: Director, George Lucas, at the New York premiere of 'The Adventures of Tintin' at the Ziegfeld Theatre. New York City, USA - 11.12.11

If, as George Lucas has announced, Red Tails , his take on the all-black Tuskegee Airmen of World War II, turns out to be his last Hollywood movie, he's going out in a blaze of critical indifference. Wesley Morris, one of the few black film critics for a major publication, concludes his review by remarking that although Red Tails "has its moments," it is "so desperate to be palatable, to appeal to everybody, that it doesn't taste like anything." James Adams in the Toronto Globe and Mail says that if he were grading the movie on virtue alone, he would give it four stars. "Virtue aside, however, Red Tails is a lousy film. Not wincingly bad, mind you, just mediocre." Joe Morgenstern in the Wall Street Journal , is not reluctant to call it just plain bad. "It's antiquated kitsch reprocessed by the producer's nostalgia for the [war] movies of his boyhood," he writes. Steven Rea in the Philadelphia Inquirer notes that Lucas chose to create "fictional composites" of the real Tuskegee airmen. "There isn't a real, flesh-and-blood figure in the bunch. Everything about Red Tails - the breaking down of racial barriers, the military achievements, the courage and sacrifice - is diminished in the process," he observes. But A.O. Scott in The New York Times notes that Lucas himself has said that he set out to make a film that would be, in his words, "inspirational for teenage boys." And, says Scott, he has succeeded in doing so. "The mostly happy ending is as satisfying as a snack of milk and cookies after a ninth Grade softball game." And Lou Lumenick in the New York Post suggests that the negative reviews for the movie are the result of their dissatisfaction with the Star Wars prequels. "Listen to the naysayers and you'll be missing one of the best January-releases of the past 30 years," he writes, "a well-acted, well-directed ... popcorn movie with great aerial Battles and solid dramatic scenes that hold your attention for two good hours."