Gerard Butler believes his latest hard man character in 'Olympus Has Fallen' is tougher than King Leonidas who he portrayed in '300'. 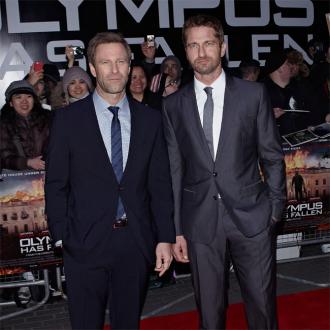 The 43-year-old actor is famous for playing the King of Sparta who has to fight the Persian army with just 300 soldiers in the 2006 film, and his latest action man role sees him portray secret service agent Mike Banning who must save the President from Korean guerilla forces.

Even though Leonidas will always have a special place in his heart, Butler believes Banning is made of even harder stuff and proves it when he has to wrestle back control of the White House.

When asked who was tougher between Leonidas and Banning, he told BANG Showbiz: ''I want to say Leonidas, but this guy (Banning) is much more hand-to-hand, he doesn't have a sword. There's more fight sequences in this film than there are in '300'. This guy's a bad ass and it's set in a more modern, realistic environment. But remember Leonidas is the guy against all the odds, he's out-manned, he's out-gunned, he's got to use his smarts, his courage and his brutality to get through it.''

Butler - who stars with Aaron Eckhart and Morgan Freeman in the film - suffered a number of injuries on the set of the action movie including two broken bones in his neck and a severely bruised arm.

However, the Scottish star insists he is used to getting hurt for his films and it's just a hazard of being a big screen hard man.