French-born Actor Gerard Depardieu Has Been Named On A List Of 14 Russian Singers And Actors Whose Work Will Be Banned From Tv, Radio And Cinemas In UKraine. 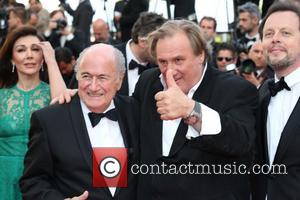 Depardieu, who received a Russian passport in 2013 after fleeing to the country over France's income tax, was banned from entering Ukraine last month (Jul15) for five years.

The actors and singers on the list were called a "threat to national security" for supporting Russia's annexation of Crimea and pro-Russian separatists in the east, BBC News reports.

The blacklist was published by Ukraine's culture ministry over the weekend (07-08Jul15).

Songs by these performers will be banned from the radio, and permits for screening their films will be withdrawn, ministry spokeswoman Daryna Glushchenko confirmed.