By now, three albums in, everybody has seen Ghost. They've stuck impressively steadfastly to their ghoulish iconography, never once breaking character. But of the people who have seen Ghost, how many could say they've heard them, or could name a song? As with all bands with a penchant for dressing up (see Kiss, Marilyn Manson, Slipknot, Alice Cooper), there are always questions as to whether there is any substance behind the gimmick, and so it is with Ghost. 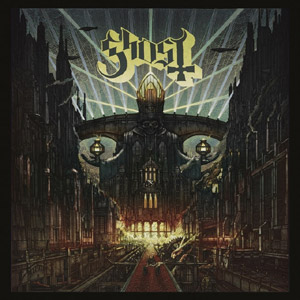 As well as being notably well disguised, Ghost are also mighty clever. 'Meliora' is Latin, and it translates to 'the search for something better'. On this LP, Ghost set themselves apart from anyone else who has come before and demonstrate that they do in fact have the tunes to go with the image. The album kicks off with a creepy theremin and mellotron introduction to 'Spirit', which gives way to a big, tense grinding rock opener. Finally, the song takes off with clean, soaring vocals, not unlike those of Opeth's Mikael Akerfeldt. The instrumentation is fantastic as well, with layers of choral backing vocals sitting on top of a bedrock which is more influenced by Deep Purple than Black Sabbath. The instrumental section features some really interesting interplay between guitars and theremins.

Next up is the swampy, groovy 'From the Pinnacle to the Pit', which is a magnificent highpoint of the LP. The intro is a thick, distorted and dirty bass line which underpins a song that sounds a little like 'Sweet Emotion' by Aerosmith, but rewritten for goths. It is almost danceable, and about as direct and to the point as Ghost ever get. After this, the album takes in a number of flavours, like the folk tinged 'He Is', the thrash metal inspired (and brilliantly titled) 'Mummy Dust', and the pounding 'Majesty'.