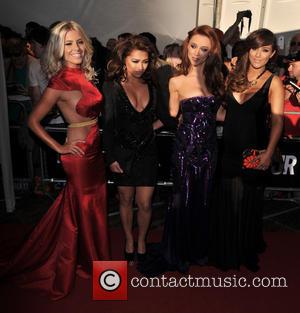 The singer has opened up about her shock pregnancy in a new Hello! interview, naming her on/off lover as the dad.

The 28 year old discovered she was expecting this summer (13) but chose to keep the father's identity a secret; she has now revealed she is five months pregnant and back with Bell.

She tells Hello!, "I think we just forgot to tell everyone we were together... When I said I was pregnant I thought, 'Why's everyone wondering who it is?' Then I remembered, 'Oh yes, that's right. I do stuff on Tv and people are confused'. So this clears it up!"

She admits she is still coming to terms with the prospect of becoming a mum, adding, "I think I was the least likely (member of Girls Aloud) to be the first to have a baby... A couple of the other girls had wanted babies for a long time but I said no way... It was definitely a shock, but I was really, really happy."

Girls Aloud split recently but Coyle is hoping they will reunite.

The singer and Bell started dating in 2008 and announced their engagement in September, 2010. They split in June, 2011.

Kimberley Walsh wanted to look her best in Girls Aloud