This years Glastonbury will go down in history. Judging by the number of interesting sunburn marks, it will probably be for the weather rather than the music. For the first time in years, not a drop of rain fell on the site for the entire weekend and temperatures soared into the 30s. For festival goers who are used to wading through fields of mud up to their knees, this was nothing short of a miracle.and the feel good party atmosphere reflected that. 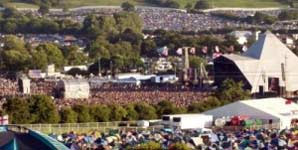 The site itself was a triumph. Everywhere you looked there was amazing attention to detail. From the giant patchwork 'Hollywood esque' Glastonbury 40 sign and the huge ribbon tower, right down to statues, murals and paintings. And that was before you got anywhere near Shangri-la.

The iconic Glastonbury Festival has hosted an array of the world's biggest and best acts over the last four decades. Names such as The Smiths, The Who, Peter Gabriel, Paul McCartney, Oasis, Kings Of Leon and David Bowie have graced Worthy Farm. So what did they have up their sleeves for the 40th anniversary? They had Muse, a safe bet for a sterling performance and the legendary Stevie Wonder. The latter drew possibly the biggest crowd the Pyramid Stage has seen with a back catalogue of classics such as Superstition and I Just Called To Say I Love you (cue thousands of mobile phones held aloft). With U2 pulling out due to Bono's bad back, rumours were rife that The Rolling Stones may step in, it being such a special year, but no such luck. Damon Albarn's The Gorillaz were drafted in instead, and that was probably the organisers worst mistake. With their tiny back catalogue of recognisable tunes, not even their special guests could save them as crowds drifted away in their hundreds. Luckily the Bootleg Beatles headlined the Acoustic tent and drew massive crowds who wanted to hear timeless classic pop songs, even if it wasn't the real thing performing them - they gave it a pretty good go.

But it's not all about the headliners. Rolf Harris drew a large enthusiastic crowd for his early morning slot to open the festival on the Friday. Every year he continues to be a real winner with festival goers, not bad when you're 80! Ray Davis of The Kinks put on the performance of the festival during his appropriately 'sunny afternoon' set on the Pyramid Stage. Performing with a huge choir and dedicating a number of songs (including the heart wrenching 'Days') to the late Kinks bassist Peter Quaife who died a few days earlier, there was not a dry eye in the crowd. With such a huge collection of sing along pop classics like Lolo, Waterloo Sunset, Dedicated Follower Of Fashion, All Day And All Of The Night, in hindsight, he would have been the perfect headliner.

The new West Holts Stage replaced last years Jazz World Stage and was graced by the funk and soul greats George Clinton and Parliament/Funkadelica. As for the electro acts, MGMT were surprisingly disappointing, partly due to poor sound, but The Scissor Sisters triumphed as Jake Shears and co were joined on stage by Kylie Minogue. The dance vibe was strong throughout the festival, with the Dance Village packed out and acts such as brit rapper Dizzee Rascal fast becoming a festival favourite.

You soon learn that you won't see nearly as much as you planned, but Glastonbury is perfect for stumbling upon little gems. The Rabbit Hole Stage (bedecked in all things Alice In Wonderland, complete with tiny little door you have to crawl through) was one of those gems. Advertised by the festival as being 'visited by the adventurous and run by lunatics'; I couldn't think of a more appropriate description. On the Friday night Birmingham band Cromwell's League played the cosy tent. Despite having supported artists such as The Futureheads in the past, they had the battle of their lives when they found themselves competing with Radiohead's Thom Yorke. His surprise spine tingling solo set of Radiohead classics drew massive crowds on the nearby Park Stage, but their energetic performance was well worth a watch and drew in the crowds as Yorke finished up.

So, I guess that's the message to take away. Glastonbury, for all its glitz and giant acts remains the world's best festival. But it's the little surprises, discovering the new bands that are performing great music in tucked away areas all over the site that makes it our favourite. As we walk away to the sound of Michael Evis and Stevie Wonder singing Happy Birthday to Glastonbury, our immediate thoughts turn to registering for next years festival.