Read our preview of Glastonbury 2011

This coming week will see approximately 150,000 punters and many more artists descend on the normally peaceful village of Pilton deep in the heart of rural Somerset. As the UK's longest running music and arguably the world's biggest and most notable of its kind, Glastonbury has established itself in folklore as the pinnacle of the summer's musical events. 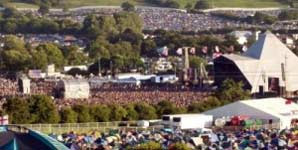 While the inaugural Glastonbury Festival attracted just 1,500 intrepid customers, mostly of the hippy variety, in 1970, it has grown over the past forty years into a huge spectacle whereby literally thousands of artists from all corners of the entertainment stratosphere will perform across 60 (yes, SIXTY!) stages over the course of five days.

What makes this year's event even more significant is the fact it will be the last until at least 2013, as Worthy Farm (the festival site) owner Michael Eavis has stated 2012 will be a fallow year to allow for crop rotation and grass to grow. Bearing that in mind, Eavis and daughter Emily were expected to push the boat out in terms of attracting major headliners this year, and while the trio of U2, Coldplay and Beyonce has drawn mixed reactions, its fair to say the undercard throws together a ridiculously enticing plethora of delights, both from a musical perspective and on a wider scale.

With Contactmusic excitedly heading along the M5 later this week, we've spent days trawling through an exhaustive list of what's on offer at Glastonbury 2011 to pick three Top 5's we're literally busting a gut to see, come rain, wind or shine.

1. PAUL SIMON
Yeah I know, so he isn't headlining and his former partner in crime Art Garfunkel won't be alongside him but with nearly fifty years worth of recorded material to choose from not to mention this year's excellent return to form 'So Beautiful Or So What' also in the bag, we can't honestly think of a better way to spend a Sunday afternoon.
(Sunday 26th. 1630-1745. Pyramid Stage)

2. WU TANG CLAN
As one of the most influential hip hop outfits of all time, only a guitar-orientated luddite would choose to miss the live spectacle that is Wu Tang Clan, complete with all the original members bar the sadly deceased Ol' Dirty Bastard. Expect nothing less than a riotous history lesson in the art of rap courtesy of Raekwon, RZA, Method Man et al.
(Friday 24th. 1500-1600. Pyramid Stage)

3. MORRISSEY
Whether you love him or hate him, you can't ignore him, and even though his last couple of albums maybe didn't quite live up to the impeccable standards set by 2004's 'You Are The Quarry', his set will surely be packed full of exquisite cuts from both his solo and previous work as a member of The Smiths.
(Friday 24th. 2000-2115. Pyramid Stage)

4. BEYONCE
Three years ago, if anyone had suggested the former leader of an American R&B flavoured girl group would be closing the main stage on the final night of Glastonbury they'd have probably been sectioned under the 2007 Mental Health Act. However, since 2009 when Ms Knowles beau Jay-Z wowed Worthy Farm anything's possible, and we predict Beyonce's set won't be any different.
(Sunday 26th. 2145-2315. Pyramid Stage)

5. U2
Everyone has an opinion about Bono and while his worthiness can be infuriating, there's little doubting his band's status as the biggest rock group in the world has been assured for at least two decades. Expect preposterous stage shows, phone calls to Obama and guitar solos aplenty as well as more hit singles than an entire week's playlist on Radio One.
(Friday 24th. 2200-2345. Pyramid Stage)

5 ACTS ACROSS THE OTHER STAGES YOU REALLY OUGHT TO CHECK OUT..

1. JUNIOR MURVIN
You've never heard of him? Ask your dad then. His Lee Scratch Perry produced 'Police And Thieves' 45 was one of the first underground reggae singles to breakthrough into the UK mainstream in the mid-1970s while later covered by The Clash. With a back catalogue stretching four decades his late night set on Sunday will be the perfect comedown after the pizzazz of Beyonce.
(Sunday 26th. 2300-0030. Croissant Neuf Stage)

2. THE HORRORS
No longer titled as the poster boys of cartoon garage, 2009's 'Primary Colours' reasserted them as one of the country's most innovative bands and this summer's 'Skying' looks set to elevate them to the next level if lead single 'Still Life' is anything to go by. Their Saturday teatime set should be interesting to say the least.
(Saturday 25th. 1810-1900. John Peel Stage)

3. SPOTLIGHT KID
Having spent the past couple of years honing their sound and writing shimmery pop songs in the vein of M83 and Slowdive, Nottingham's Spotlight Kid look set to be gracing bigger stages in the foreseeable future if forthcoming single 'Plan Comes Apart' is anything to go by, starting here.
(Friday 24th. 1800-1830. BBC Introducing Stage)

4. WILD BEASTS
The UK's most original band finally get the recognition they deserve, being asked to headline The Park stage on Saturday night. While going head-to-head against Coldplay, The Chemical Brothers and Big Boi may be a daunting prospect for some, Cumbria's finest have two of the best albums released this century in their locker, and one of the most invigorating live shows anywhere on earth to boot.
(Saturday 25th. 2300-0015. The Park Stage)

5. DENGUE FEVER
Cambodian sextet Dengue Fever may be relatively unknown in the UK, but their exotic brand of psychedelia, surf rock and avant-garde folk has brought them a devoted underground following, most notably in LA, where they're currently based. The release of fifth album 'Cannibal Courtship' last month to rave reviews only added to their growing reputation, while their live show is simply unmissable.
(Friday 24th. 1345-1445. West Holts Stage)

5 OTHER ATTRACTIONS WORTH VISITING.

1. THE UNFAIRGROUND
This disaster-themed area is the brainchild of visual artist Joe Rush and features The Hellcopter, an aircrash themed tequila bar called The Plane Wreck and Bez's Acid House Tent among its attractions.

2. SHANGRI-LA
With its design based on 'Blade Runner' and a host of themed delights such as Phil's Diner, the bed-ridden Slumbarave and all-encompassing cabaret bar The Snakepit to entice you in, Shangri-La is THE place to go for those not content with retiring to their tents once the live music has subsided.

3. THE PILTON PALAIS CINEMA
Sometimes, there's nothing better than a good old feature film to set the mood, and The Pilton Palais Cinema has an abundance of them running all the way from midday until the early hours of the morning throughout the festival. Our picks include Social Network on Friday evening, Upside Down during the early hours of Sunday morning and Inception later that evening.

4. THE COMMON
Themed as a Latino playground somewhere between Mexico City and Salvador, features of The Common - traditionally one of Glastonbury's most vibrant areas - include The Photo Booth, The Lost Picture Show, and Campo Pequeno, where the likes of Friendly Fires, DJ Yoda and Zero 7 will contribute DJ performances over the course of the weekend.


5. THE WOMBLES
Yes, we aren't joking when we say Elisabeth Beresford's fictional creatures are scheduled to play an hour long set this year. Expect laughs and singalongs galore from Orinoco, Tobermory, Uncle Bulgaria and co. To add to the fun, you can even play the guessing game of who's inside which character's costume. Good eh!
(Sunday 26th. 1400-1500. The Avalon Stage)