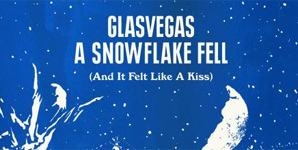 Glasvegas have had an amazing 2008. The Glaswegian band have played hundreds of sell out gigs around the UK, supported Oasis and Kings of Leon at key events, released a number 2 certified gold debut album, toured in America, received great reactions to their single releases and have also been chosen to headline the NME tour next February.

Amongst all this chaos the band took the rather clever decision to release a Christmas album. They have crammed into their already hectic schedule enough time to write 5 cracking new tracks and travel to Romania to record. The Christmas album will be bundled in with their debut album as a six-track Christmas bonus disc on December 1st, through Columbia Records, and will be available for digital download on the same day.

The album was recorded in Transylvania at St Nicholas Church in Brasov, with two tracks featuring the local Concentus Choir. A Snowflake Fell (And It Felt Like A Kiss) features 5 new Glasvegas songs, all with a seasonal theme, and a stunning version of Christmas classic 'Silent Night' featuring the Concentus Choir singing in Romanian.

The album opens with James Allen singing 'Christmas time is here again' James and cohorts use their songs to paint a Christmas scene much darker, more realistic, more human and typically more emotionally laden than most other Christmas albums. As James Allen recently told the BBC 'I guess everybody's Christmas is not like Cliff Richard's'.

For most of us The Pogues 'Fairytale of New York' is the only Christmas song that doesn't make you wince because of its slushy over sentimentality. Well here's a product that is going to fill that gap for you. Dwelling on subject matter such as homelessness, the futility of a directionless existence and emptiness James Allen has crafted some beautiful songs here.

As a Glasvegas product this Christmas album works very well. It seems to have given James an outlet to write into - without having that crippling 'second album' weight hanging over his head and the Christmas theme gives him cart blanche to milk the song-writing a bit more. Which James does elegantly.

Production has also gone forward - Glasvegas spent a few days with Rich Costey laying down the bones before taking the tracks to Transylvania to complete them. Sonically A Snowflake Fell (And It Felt Like A Kiss) feels different to the debut album and I think the sound has advanced slightly. That's what a solid year on the road can do for a band.

All in all what you have here is, in my opinion, is one of the brightest musical prospects around using their talents creatively and bravely to show us more of what they can do while also providing a brilliant and heart-felt musical backdrop to the festive season.

Glasvegas will be touring the UK through December as well as bringing in the New Year at the Hogmany Street Party, in Edinburgh on 31 December.