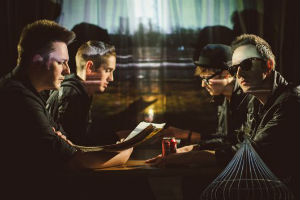 Glasvegas have today made their new album 'Later.When The TV Turns To Static' available for pre-order via the band's official website and all good retailers.

The album will be released via BMG / Chrysalis on 2nd September.

Released as a very special edition CD/DVD, / heavyweight white vinyl / standard CD / as well as a deluxe and standard digital download 'Later.When The TV Turns To Static' is the third studio album from Glasvegas, following their eponymous platinum certified debut and it's top-ten follow-up 'Euphoric /// Heartbreak \\\'. The album was recorded at Glasgow's Gorbals Studios and produced by songwriter and lead singer James Allan.

Prior to the album, Glasvegas release a single taken from it in the shape of 'If' on July 8th. The single follows the first track to be heard from the album, 'I'd Rather Be Dead (Than Be With You)', released as a limited single in April to coincide with Record Store Day.

All formats of 'Later.When The TV Turns To Static' were designed by James Allan and are as follows:

Album Masters - Later.When The TV Turns To Static - Youngblood - Choices - All I Want Is My Baby - Secret Truth - I'd Rather Be Dead (Than Be With You) - Magazine - If - Neon Bedroom - Finished Sympathy

DVD content - Brand new and exclusive semi-acoustic performance at Glasgow's 19th Century Adelaide Baptist Church, previously unseen live footage from King Tut's, 'I'd Rather Be Dead (Than Be With You) Official video, 'If' Official Video,  and interviews, behind the scenes footage and more strange surprises.

Later.When The TV Turns To Static - Youngblood - Choices - All I Want Is My Baby - Secret Truth - I'd Rather Be Dead (Than Be With You) - Magazine - If - Neon Bedroom - Finished Sympathy with 8 page lyrics booklet based on chevron inspired designed and created personally by James Allan.

Standard - as per standard cd with PDF booklet

Deluxe - the standard digital download tracklist of the album masters plus:

As part of the pre-order launch Glasvegas take to the road for a small run of intimate dates: