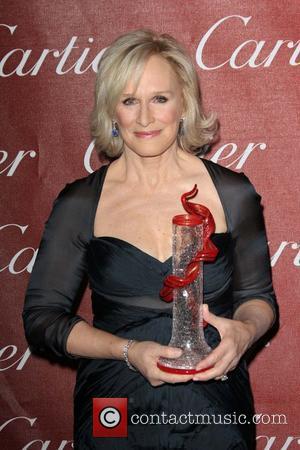 Glenn Close, George Clooney, Brad Pitt and Michelle Williams were among the famous faces who picked up top prizes at California's Palm Springs International Film Festival on Saturday (07Jan12).
Close was celebrated for her longstanding contributions to Hollywood by accepting the Career Achievement Award at the 23rd annual gala, while Clooney took home the Chairman's Award for his roles in The Descendants and The Ides of March.
Angelina Jolie beamed with pride as her partner Pitt accepted the Desert Palm Achievement Actor Award from his Moneyball co-star Jonah Hill, while Al Pacino hailed Jessica Chastain an acting prodigy as he handed her the Spotlight Award.
Chastain's The Help co-star Octavia Spencer teared up as she received the Breakthrough of the Year Award and thanked her late mother and father for guiding her career.
The actress also used her acceptance speech to scout out a potential boyfriend, telling the eligible men in the room, "I would be remiss if I didn't say... I'm single, gentlemen. I just had to throw that in there."
The most emotional moment of the night came as Michelle Williams was recognised for her portrayal of Marilyn Monroe in My Week With Marilyn, and dedicated her Desert Palm Achievement Actress Award to the late screen legend.
Williams told the crowd, "My only wish is that Marilyn herself could have experienced in her lifetime what I am experiencing tonight. When she did stretch beyond her pin-up picture, she was pushed back into her place. I accept this award on both our behalf."
British actor Gary Oldman won the International Star Award while the Ensemble Award was shared between Young Adult stars Charlize Theron and Patton Oswalt, as well as their director Jason Reitman and screenwriter Diablo Cody.