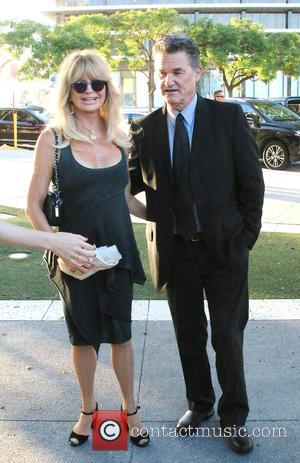 The programme's panel of presenters was reduced by one on Monday's broadcast before host Ruth Langsford unveiled the Private Benjamin star as special guest.

Ruth told the audience, "We have a brand new Loose Woman... She is quite simply Hollywood royalty. We are delighted she is here. Please welcome director, writer, and Oscar-winning actress Goldie Hawn!"

The star was then escorted onto the set by two topless male models and she told the panel of her reasons for agreeing to help present the current affairs discussion show: "Thank you so much for having me... I think it's such a great format, there are so many things to talk about... I love what you're covering and I'm excited to be a part of it."

During the broadcast, Goldie read out text messages from viewers and joined in debates about memory loss, marriage, 'revenge' pornography, and social media, which she insisted is creating a "narcissistic society".

She also drew gales of laughter from the studio audience when she confused the term "clued up" with "glued up", and she was presented with a souvenir Loose Women shirt and coffee mug as the credits rolled.