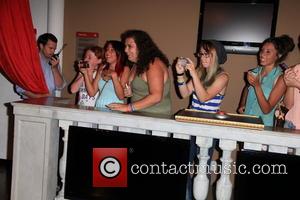 Editors of Britain's GQ magazine have been bombarded with threatening messages from unhappy One Direction fans over the publication's latest coverage of the pop group.

The stars have posed for individual cover shots for the U.K. publication as part of a feature on the group, but many of the band's young fans were unhappy with the tag line on Harry Styles' image which quoted Daft Punk track Get Lucky.

They flocked to Gq's U.K. website and Twitter page to complain, and the traffic was so heavy it prompted the site to temporarily shut down.

Editors have now issued a statement revealing the seriousness of some of the threatening messages.

The statement reads, "Here at Gq, we like to think we listen to our readers. However when we unveiled One Direction as the cover stars of our September issue last night, we weren't quite prepared for how many tweets we would receive in such a short space of time. (In fact, the response was so large that Gq.co.uk briefly crashed under the strain). While most were positive, and some less so, a few frankly had us fearing for our lives... A lot of the band's fan base took issue with certain cover lines, in particular one on Harry Styles' cover, He's Up All Night To Get Lucky. It just goes to show: hell hath no fury like a Directioner scorned."

Gq bosses have republished a number of the terrifying tweets on their website, and the messages include foul language and violent threats, while several particularly nasty notes threaten to bomb the magazine's offices.