The Commonwealth Children's Choir - A set of 100-year-old bagpipes belonging to Pipe Major William Lawrie of the Argyll and Sunderland Regiment who died in the trenches during the Battle of the Somme is displayed during a practice ceremony on Horse Guards Parade. The actual ceremony, an 'Act of Reverence' for all fallen soldiers at the Somme in 1916, will take place on the 8th of June 2016. at Horse Guards Parade - London, United Kingdom - Wednesday 4th May 2016 Every Man Remembered statue and Welsh Guards - Gallipoli Celebrations featuring the 'Every Man Remembered' sculpture outside the Legion's Cardiff Pop In Centre, to mark the centenary of the Gallipoli Campaign in the First World War in Cardiff. at Royal British Legion Pop Up Shop - Cardiff, United Kingdom - Thursday 23rd April 2015 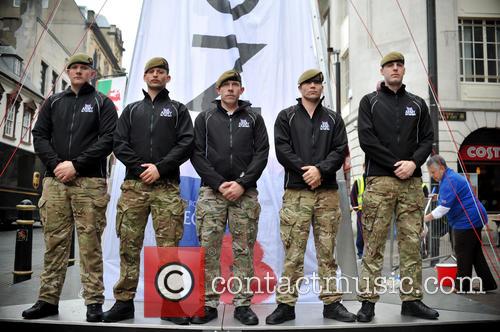