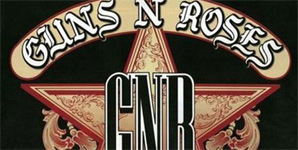 The hype, rumours and statistics which surround the release of this record have verged on the ridiculous, though understandable to a degree as it has taken nearly a decade-and-a-half to hit the shelves. Those stories can be found plastered all over the internet, but ultimately what anyone should actually care about is whether or not it is any good.

In short, the answer is yes it is, to varying degrees. The opening quartet of tracks sit nicely amongst GN'R's finest, with the opening title-track acting as a statement of 'I'm back' from Axl Rose which contains all the trademark sounds of the band's rockier sound. Electronic samples litter the ferocious 'Shackler's Revenge', while 'Better' is quite simply an excellent tune which swaggers on crunching riffs to back a tale of a forlorn heart. Piano-led ballad 'Street Of Dreams' is a cousin to 'November Rain', Rose pouring out his heart again while giving an education in how to produce an epic monster full of swirling strings, soaring solos and of course his wonderfully dramatic vocals. With less immediate impact 'There Was A Time' (with its unintentionally humorous acronym) develops into a pleasing listen while 'Madagascar' is brilliantly haunting, utilising samples of Martin Luther King Jr. and various films including 'Se7en'.

The remainder of the record varies from the pleasant 'Cather In The Rye' to the unpredictable mess of 'Scraped' and overblown 'This I Love'. A couple of other decent heavier songs arrive in the shape of 'Riad N' The Bedouins' and 'I.R.S.', but in a year when truly great rock numbers have been at a premium, they still seem to stand out somewhat. Ultimately at over seventy minutes the record is a slightly too long, but what is proved by 'Chinese Democracy' is that Axl Rose is perfectly capable of continuing Guns N'Roses without his former gang of Slash, Duff McKagan et al.