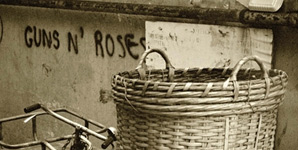 Finally after many delays, rumours, guitarists and dollars spent, The Most Dangerous Band In The World are finally back with an album of new material. Nobody could be kidded into believing this is anywhere near the same group who unleashed 'Appetite For Destruction', but anticipation is certainly high for the return of the reclusive Axl Rose.

Such is the sadness of human nature that many want the great, or at least once great, to fail. Perhaps this is why Rose has taken so long to perfect his latest project, with this being the first cut from it. Beginning with an electro-riff, it's nearly a full ninety seconds before any vocals..then comes that trademark shriek, which introduced 'Welcome To The Jungle'. What follows is a gritty, aggressive anthem complete with huge chorus and ear-thrilling guitar solo that may as well have been composed by Slash. While it doesn't go as far as the genius that the Izzy, Duff et al line up reached, it certainly makes you think Rose could well pull off the GN'R comeback.