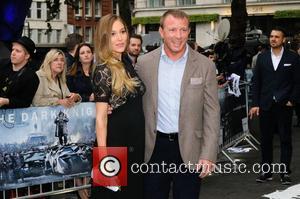 Congratulations to Guy Ritchie and his model fiancée Jacqui Ashley after they celebrated the arrival of their second child! The couple already have a child, their son Rafael was born in September of last year, but he will now have a sister to play with after it was revealed that a little girl arrived at a private hospital in London.

A source for the pair told the Daily Mail “We can confirm that Guy and Jacqui are the proud parents of a new baby girl. Mother and baby are doing well.” Another told The Sun “They are both utterly delighted at the birth. The fact they now have a girl is an added bonus — Guy always wanted a boy and a girl.”

Although these are the first children for Ashley, Ritchie is becoming a father for the fourth time, having had 11 year-old Rocco and six year-old adopted son David from his previous marriage to Madonna. The news caps a whirlwind few weeks for the couple; it was just last month at director Ritchie decided that he wanted to be a husband again and asked Ashley for her hand in marriage.