Guy Ritchie To Be A Dad Again

Guy Ritchie and his girlfriend Jacqui Ainsley have confirmed they are expecting another baby together and the couple are ''thrilled'' with the news. 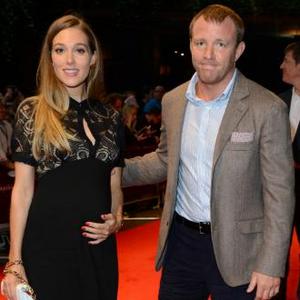 Guy Ritchie and his girlfriend Jacqui Ainsley have confirmed they are expecting their second child together.

The couple sparked pregnancy rumors last night (18.07.12) when the model appeared on the red carpet at the European premiere of 'The Dark Knight Rises' with her director boyfriend sporting a bump under her dress.

A spokesman for the 'Sherlock Holmes' filmmaker has now confirmed the happy news in a statement which said: ''Guy Ritchie and Jacqui Ainsley are thrilled to confirm they are expecting their second child together later this year.''

This will be the director's fourth child. He has an 11-year-old son Rocco and adopted son David, six, with his ex-wife Madonna.

Just last month, Jacqui revealed she and Guy were keen to have another child and admitted they both dreamed of having a ''big family''.

She said: ''I'd love more children. Guy and I have always wanted a big family. It's something we planned all along.''

Jacqui also revealed she is close to Rocco and David, saying: ''This is the first time I've been a biological mother but we've got the two big boys and they absolutely dote on Raph. They're always dancing with him and wanting to play with him.''

'The Dark Knight Rises' premiere was attended by numerous cast members such as Anne Hathaway, Christian Bale - who reprises his role as Batman for a third time in the film - and his wife Sandra 'Sibi' Blazic, Tom Hardy and Morgan Freeman and a galaxy of stars including Peaches Geldof, Pixie Lott and Benedict Cumberbatch.