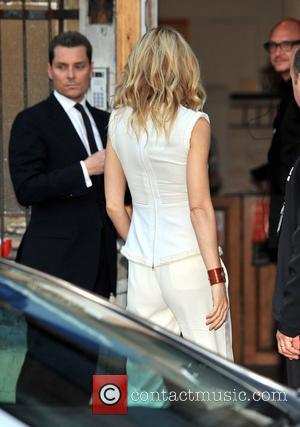 Picture: Gwyneth Paltrow A Night out with the Millennium Network held at the Old Vic Tunnels - Arrivals. London, England - 22.05.12

Gwyneth Paltrow has been recognised for her unrelenting chic and was honoured as the World's Best Dressed Woman according to People magazine.

The Oscar winner who has starred in a multitude of Hollywood blockbusters including 'Se7en', 'Iron Man' and 'Shallow Hal' was awarded the accolade on account of her 'unparalleled' red carpet entrances and 'always arriving in unexpected, yet chic looks'. The 39-year-old narrowly overtook style icons Rihanna and Kate Middleton, AKA Catherine, the Duchess of Cambridge who won Best Risk-Taking Style and Best Classic Style respectively; Catherine's royal get up was admired as 'flawlessly elegant attire'.

The popular publication also praised Paltrow for her slender figure commenting, 'Of course, it helps to have Gwynnie's body when going for a Stella MCCartney racer-back gown or a Prada micromini.' Sufficeth to say, she really isn't showing her age or the fact that she has had two children with the toned abs and enviable pins that she regularly displays on the red carpet, leaving the rest of us wondering "what's the Gwyneth Paltrow diet?". Her stylist, Elizabeth Saltzman, explains how her look is always about keeping it toned down and sophisticated: 'She has a uniform. It's simple, not overdone.'

Other stars among People's best dressed list were model Miranda Kerr who got the award for Best Street Style, actresses Emma Stone and Jessica Alba and stylish reality stars, the Kardashian sisters.