Gwyneth Paltrow was honoured with a Star On The Hollywood Walk Of Fame yesterday (13.12.10). 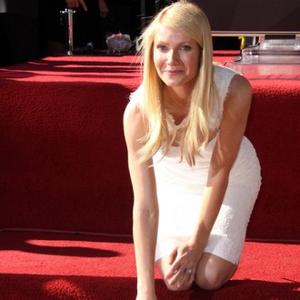 Gwyneth Paltrow found it "overwhelming" to be given a Star On The Hollywood Walk Of Fame.

The 38-year-old actress - who has children Apple, six, and Moses, four, with husband Chris Martin - was given the honour in Los Angeles yesterday (13.12.10) and admitted she was struggling to keep her emotions in check.

She said: "I'm proud my grandchildren can one day come and see my name on the sidewalk.

"I think I am going to get in the car and burst into tears. It just means so much to me to see all the people that I really love, and who have been supportive of me forever. I feel so honoured I can't believe it.

"This city is so much a part of my heart and soul. I don't think I would be here were it not for my family and friends."

Paying tribute to the blonde beauty, Shana Feste, who directed Gwyneth's latest movie 'Country Strong' told guests - including country singers Faith Hill and Tim Mcgraw and 'Glee' actor Matthew Morrison - at the ceremony that the actress is like a "strange alien created to perform."

Shana added: "You could be having the most mundane conversation about the weather, and she hears the word 'action', and she would deliver the most nuanced, layered, heartbreakingly beautiful scene and look at you like she just tied her shoe."