Gwyneth Paltrow has no grey hair 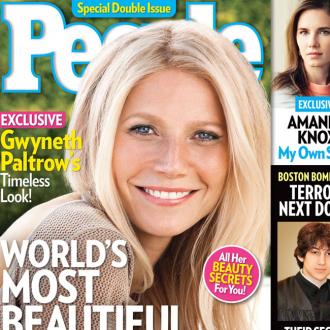 Gwyneth Paltrow claims she doesn't have any grey hair.

The 40-year-old 'Iron Man 3' star says she has never coloured her blonde locks because she hasn't found any grey strands yet.

The actress, who has been named the World's Most Beautiful Woman by People magazine, told the publication that while she is a huge fan of beauty products including blusher and mascara, her hair is very low maintenance.

She said: ''I wear cream blush and mascara. Mascara makes you look awake and like you've had a good night's sleep even if you haven't.''

The actress revealed some of her favourite products include Terry Or De Rose Baume Precieux, Kiehl's Lip Balm, Sonya Dakar Flash Facial and for her body she indulges in Ila Bath Salts.

The mother-of-two, who shares daughter Apple, eight, and son Moses, seven, with her husband Chris Martin, insisted she is very laid back when it comes to her appearance.

If she ever does opt for glamour at home then her husband Chris Martin will make fun of her.

She added: ''He'll make a joke about it. If I've gotten fully dressed up, he'll be like, 'Oh, wow! You're Gwyneth Paltrow!' Because he's used to seeing me in like baggy shorts and frizzy hair.''

Gwyneth revealed her daughter is already interested in fashion and beauty and she lets her wear a little make-up on special occasions.

She said: ''When we're home sometimes, she'll put on mascara. And sometimes I'll let her wear something out to dinner - but just a little dab.''

To see more of the exclusive interview with Gwyneth pick up this week's special issue of People, on newsstands Friday (26.04.13).