Is Gwyneth Paltrow Too Old To Have Another Child? 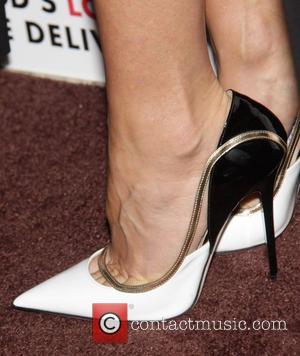 Gwyneth Paltrow has revealed how she would love to have another child, though fears she may be too old at 40. In the latest issue of InStyle magazine, Paltrow told good friend Diane Von Furstenberg, "My brain says, 'Oh I think I'm done, the kids are big now and I don't want to go back to changing diapers.' But a part of me would love to have another. Of course, I'm old now!"

Paltrow certainly looks younger than her years in the accompanying photo-shoot, wearing a pink Atelier Versace dress and a black Armani gown, amongst others. She already has two children with husband Chris Martin, Apple and Moses. She recalled, "When Apple was born she had the hugest blue eyes. I looked into them and she was looking at me, and I felt like, 'You are here to teach me everything.'After Moses was born, I had postpartum depression. It was a difficult time and because of that I believe I have an extra empathy for him and he for me." The Oscar winner - who has been married to the Coldplay frontman for nine years - also discussed their often tempestuous relationship, saying, "Artists are sensitive; there are ups and downs, mood-wise. Musicians need a certain gravitas and focus in order to write." So she's basically saying Martin is one moody husband, right?