Where do all the girls of Leeds go on a Friday night, the ones who are too naughty to go to choir, but too nice to be riding in cars with boys? Answer - they're all at this Haim gig, helping to sell out tonight's medium sized venue and capping off a monster year for the three sisters who've used the platform of being the BBC's Sound of 2013 as energetically as any former winner. 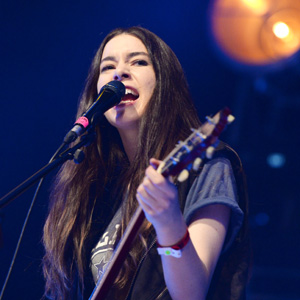 Transport problems of the Friday-close-to-Christmas kind and a parent friendly start time of twenty past eight meant that I missed the opener 'Falling', one of the highlights of their chart-topping d'but album 'Days Are Gone'. At the glossier end of the band in recorded mould, it's a song which is as representative of the record's sound - sort of Pat Benatar meets Fleetwood Mac covering Destiny's Child - as nearly any other. It fails, however, to fully illustrate the paradox which most of the designated drivers I end up getting stood with at the back may have been unaware of, being that live, these girls ROCK.

It's a fact which anyone who'd taken in the band's set at Glastonbury this year will have already known, by which they shake off some of the album's more lacquered touches and bring to the songs a fair amount of SoCal rock flourishes instead. This sense of heft, coupled with the odd parent-unfriendly exhortation such as: "Leeds: we fuggin' luurve you" makes the ride a lot more fun than it could've been, even leading to something resembling the world's politest mosh pit during a hip swaggering rendition of 'Don't Save Me'.

In the flesh, the song is a microcosm of what elevates them above the average modern-day popstars. Whisper it quietly, but 'Days Are Gone' is more frequently good than great, but on stage the sister's rapport is savvy and smart, particularly during the harsh but fair treatment of a water throwing member of the crowd. The real star of the show is the statuesque bass player Este, a musician who quite clearly would be doing all this stuff anyway if there were only five people to play in front of, whilst siblings Danielle and Alana take turns in conducting the call and response routines so beloved of those who want their public to be something more than spectators. The effect is, as with so many American groups, of a show than a self-conscious public examination, underlining the feeling that, away from the hype, they have had a chance to cement what must've been a glorious 12 months into something long term and meaningful.

Encoring with 'Running If You Call My Name' and a kinetically charged, drum heavy version of 'Let Me Go', the set's brevity is of little concern to the smiling punters as they make their way eagerly towards the merchandise stand. Reflecting, you feel as though there is a darker, deeper set of songs to come at some point from the trio, some of which it might be harder to turn into something as radio friendly. For now though, the machine has them, and they seem to be coping just fine. Outside, I walk past a teenage girl telling her friends solemnly that her dad can take all seven of them in his car. He might not have had much of a Friday, but they'd very definitely seen their dose of little Yuletide rebellion. Ho, ho, and indeed, ho.