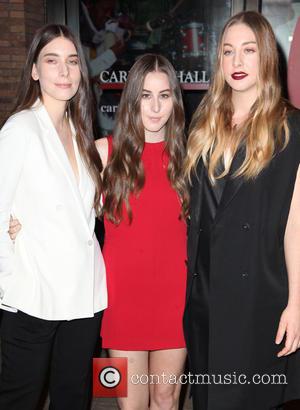 Picture: Danielle Haim, Alana Haim and Este Haim - Shots of a variety of stars as they arrived outside the Glamour Women of The Year Awards...

Haim star DANIELLE Haim pulled out of appearances at a number of pre-Grammy Awards parties after she was involved in a car crash in California on Friday (06Feb15).

The girl group's guitarist/lead vocalist was on her way to an event organised by fashion company Opening Ceremony ahead of Sunday's (08Feb15) Grammy Awards, when the car she was travelling in was involved in an accident.

She missed the bash as well as Clive Davis' annual star-studded gala on Saturday (09Feb15), but her representative tells Billboard.com that Haim is "fine" following the crash.

It is unclear whether she will be well enough to attend the award ceremony in Los Angeles on Sunday (08Feb15), where the sibling trio is up for the Best New Artist prize.

More: Haim Vs. Justin Timberlake For No.1 UK Album | Contactmusic.com