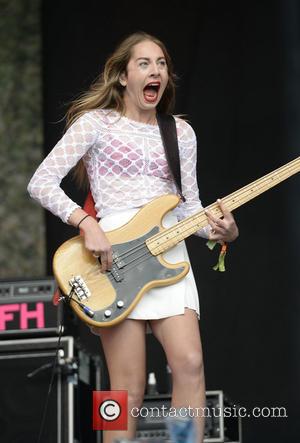 Haim star ESTE Haim struggles to manage her diabetes on tour because she is unable to get the proper food and exercise she needs to stay healthy.

The rocker famously suffered a bout of hypoglycemia on stage at Britain's Glastonbury Festival last summer (13) and she later insisted she had been too busy to eat.

Haim has now revealed she faces a constant battle to control her condition while enduring long days, hours of travelling, and a busy work schedule as part of the girl group.

She tells BBC Newsbeat, "It's due to the fact that your hours are always so different and food is never really constant. When you are trying to figure out, 'Ok, if I am eating this food, how much insulin do I have to take?' There is a lot of different factors that go along to treating diabetes, it's exercise, it's diet and insulin.

"Sometimes I can't exercise because I've spent the last 12 hours on flights or I'm exhausted or I don't want to exercise... I think it's something that I have and I have to be responsible for it and own up to it and talk about it."