Haim have always been 'big fans' of Calvin Harris

The Haim sisters were thrilled when Calvin Harris asked them to appear on his album 'Motion' because they've always been big fans of his music. 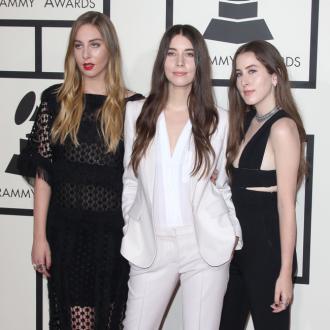 Haim were big fans of Calvin Harris before they collaborated with him.

The three sisters, Alana Haim, Danielle Haim and Este Haim, have been lovers of the DJ's music from the very start of his career and used to go to ''all his shows''.

The girls were thrilled when Calvin asked them to appear on his album 'Motion' because it was their dream to work with him and they are very pleased with their track 'Pray to God'.

During an interview with Ryan Seacrest on his KIIS FM radio show, Este said: ''We've known Calvin for a while. He put out a record in like 2008 or 2009 like back in the day, and I used to go to all of his shows and I was a big fan. We just kind of linked up. I think he knows how much of a fan I am.''

Out of the three siblings, Alana revealed Este is the ''best'' at meeting artists and stars she likes and she isn't afraid to just go and approach people at showbiz events.

Alanda said: ''Este is also, out of all three Haims, the best at getting what she wants. Like, basically if she wants to meet someone, Este is [the best.] Like me and Danielle are like, 'We're scared, we don't know what to do!' ''