Haim had the ''worst day of their lives'' turning down a guest spot on the new Arctic Monkeys album. 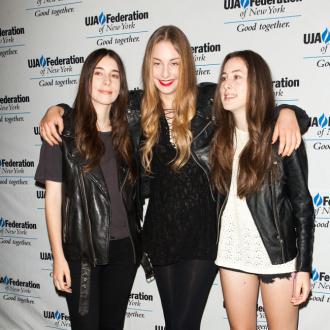 Haim had the ''worst day of their lives'' turning down a guest spot on the new Arctic Monkeys album.

The 'Don't Save Me' band were rushing to complete their debut album, 'Days Are Gone', when they got the call from their British rocker friends to appear on their 'AM' record, and are devastated they didn't have time.

Este Haim said: ''We tried to push things around to make it work. But when it came down to it, we had to finish our record. We didn't have enough time to come in and learn the harmonies. It would have taken a couple of days. That would have been our biggest dream come true - to sing on an Arctic Monkeys record... It was one of the most painful calls, to say no. Maybe the worst day of my life.''

Este - who is joined in her band by sisters Alana and Danielle - holds out hope of one day meeting the Arctic Monkeys, led by singer Alex Turner, and hopefully getting to achieve their dream of recording with them.

She added to NME magazine: ''I would love to [collaborate in the future]. Apparently Alex Turner came to our show when we opened for The XX in Los Angeles. Thank God we didn't know while we were playing.

''I would have been totally starstruck. My brain may have melted in my throat and I may have thrown up my brain.''