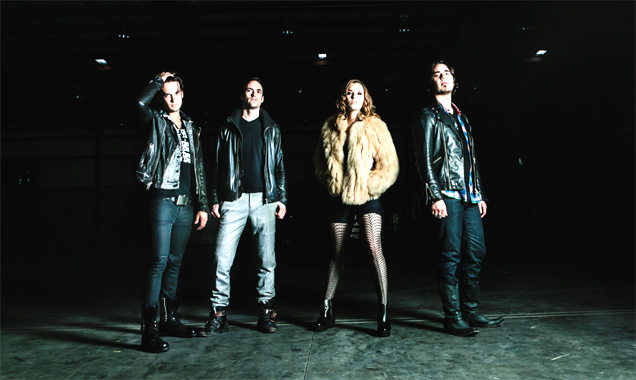 With the release of their third album 'Into The Wild Life' due out in April 2015 (April 10th in Europe, 13th in the UK and 14th in North America), Pennsylvania rock band Halestorm have kicked off their first European tour of the year. They'll be joined by support bands Nothing More and Wilson for their UK and Euro dates, before uniting with The Pretty Reckless when they hit the road in the US next month.

We caught up with Halestorm bassist Josh Smith ahead of their gig at the Roundhouse in London, to discuss their new album, their worst fan moments and their best times on tour.

Contacmusic: How's the tour going so far?
Josh Smith: Amazing, we landed in Dublin, almost 2 weeks ago, and it was our first time over there in Ireland; we played Dublin and Belfast and it was amazing. We're always so excited and always look forward to coming over here to play. The UK has just been so amazing to us; they just really latched on quickly. It's really really cool.

CM: So 'Into The Wildlife' is out in April, do you think this will be your most successful album yet? If so, why?
JS: I do, yeah. I think it's just the best representation of us yet. It's a more mature Halestorm all around and we really, truly love the songs. It's not that we don't love our old songs as well but we're so excited to unwrap this and unveil this to the world. Yeah, I definitely think this will be the most successful. If you want something in particular, I think Lzzy's lyrics are much more personal. She got into the more personal stuff a little bit last record, and moved away from the tongue in cheek, sarcastic catchy songs. It's just a lot more honest.

CM: The video for 'Amen' has a lot of acting in it which we don't see a lot of in Halestorm videos. Did you enjoy the acting?
JS: Absolutely, yeah. It's only the second video; we did a video for 'Familiar Taste Of Poison'. This one was pretty easy. We'd just played the last show on tour and we drove in right on set with one eye open, a little bit of a headache from the night before. So the bus driver part was very easy for me, I was already grumpy!

CM: So you've toured all over the world, what's the best show you've ever done?
JS: Wow, there's so many memorable ones. Download was absolutely amazing we've played that twice and both times have just been incredible. That was really fun you know the festival gigs seeing that size of a crowd in front of you. It's really crazy. You don't see people anymore you see a mass.. a moving organism you know. That is always a great show and a really memorable one.

CM: Is there somewhere that you haven't yet played that you'd really like to in the future?
JS: Yes, I mean so many places. I think we pretty much have the States covered, we just love touring round there. We last did Alaska and Hawaii which was really cool, but we haven't been to Australia yet we'll get there next year, South Africa, a lot of Eastern Europe, we went to Moscow. We're going to Warsaw, Poland, and a lot of South East Asia. I mean we've played Japan but not on a tour - more of a couple of one off gigs.

CM: How does it feel when you walk out on stage and the crowd starts screaming?
JS: You can be having the worst day ever and, at that point, it doesn't matter. It's time to go to work and we have the best job ever.

CM: What's next for Halestorm following the release of this album?
JS: We planned a tour and hopefully visit here often. This train has just started, we've just left station and we're going to be out for the next 2 years I would imagine. We're very much looking forward to it, hopefully play the Roundhouse again, or Brixton, wherever will have us.

CM: What is your least favourite song out of all of the Halestorm songs so far?
JS: Fortunately, getting to this point, it's not like, 'oh, we only have one album out, there's not a tonne of material to play'. We're moving onto our third album and we have a couple of covers albums, we have some older stuff that we really don't play. But there are literally songs from both albums one and two that we've never played. One of them being 'Beautiful With You' which people ask about, but we just thought it was okay. It was a little bit of a sort of political battle for that thing to get on there. It's a good song, we just never saw ourselves playing it live and I don't think we ever will. Maybe we've played it acoustic before.

CM: What has been your worst fan encounter?
JS: Worst fan encounter. We had a really funny one, I wasn't involved. Joe and Lzzy, it was after the Grammys and we were leaving a Grammy party and there was an incident. I won't get into that, the ambulance had to come, Halestorm was okay. But they kind of locked down the place. I was stuck on the outside, they didn't know what happened, there was an ambulance there, someone was hurt. Everyone else was stuck inside, I couldn't get back in, I was drunk and angry, whatever. Joe and Lzzy came out, they were all frazzled and everything and they were waiting for a cab for the Chateau Marmont and these paparazzi there were crazy snapping pictures and this guy, like eBayer type guy, is like asking them to sign pick guards and everything. A friend of ours is injured right now and it just so happens my wife is there and she goes running up like, 'No, this is inappropriate, this is not the time!' So it got out. It was sort of a stressful time and those sorts of fans where they're clearly asking you to sign stuff, a lot of stuff, to sell for their benefit, that can be frustrating. Otherwise, we have the best fans ever. We really do.

CM: Are there any new and upcoming bands that have caught your eye recently?
JS: Yeah, actually. It's something we've been talking about a lot lately because we have a lot of tours coming up. If we're the headliners, we need openers and we want to bring out people we're excited about. This tour worked out great. Wilson is awesome, and they're awesome dudes and Nothing More we had heard a lot about and they're great so this tour has shaped up really nicely. There's this band I've listened to recently, been hearing about them a lot and they're called Marmozets. They're pretty sweet. So I downloaded their album. What else have I been listening to lately? There's this guy back home, he's kind of country, he's super country actually, but very old school. His name is Sturgill Simpson, I've enjoyed that record. It's a nice taste of home, especially being over here.

CM: What would you say to people that compare you, and all female fronted bands, to Paramore?
JS: Well, we got that a lot with Evanescence. I'd say thank you. In the case of Paramore or Evanescence of whatever, they're very successful female fronted bands. Okay, if that's your take on it then thank you, I don't personally see it. I think art in general, people look for some sort of relating substance that they can latch on to, I know I certainly do it. It's those influence that influence further musicians and artists to make music, so if that's what they think, cool, thank you. Alright, I'll take it as a compliment.

CM: Well, if you get bored on the tour at any point, give it a go and send us a video or something!
JS: When I do it I will Tweet a picture and maybe a number! I would estimate 18. Is that a lot of grapes? 15. 15 grapes. Yeah I'll try it. Halestorm I Miss The Misery Video