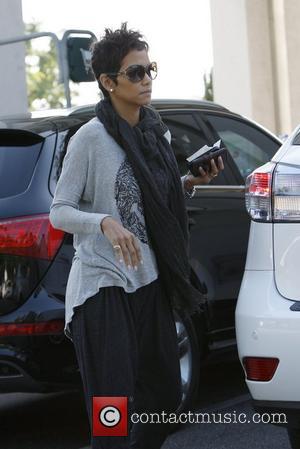 Picture: Halle Berry seen out and about in Beverly Hills Los Angeles, California - 21.11.12

When Halle Berry's ex, Gabriel Aubry, dropped their daughter Nahla back to the actress's home no one quite expected what an explosive task it would be.

Custodian battles are always fierce, personal and unpleasant, and though all families try to avoid it, all too often battles in the court room manage to find their way into  reality. That's what happened yesterday when Aubry and Halle's new fiancée ended up in a fight, reportedly over the custody of Nahla, whom Berry wants to relocate to France with herself and Martinez, who is French.

Aubry really seems to have done the worst out of the whole debacle. TMZ report that he's broken a rib, 'contusions to the face' and potentially some pretty serious head injuries, and to adult insult to those injuries, he was also arrested and released on a $20,000 bail. Whereas Martinez walked away with a swollen hand and neck injuries. The worst part of the whole ordeal for Aubry is that a judge ordered an emergency protective order which means that he can't come within 100yards of Martinez, Berry, or his daughter Nahla. This may really stand against him when the question of custody comes up again in court.

It can't have been all that easy for Martinez either, he was spotted on Friday morning (23rd Nov. 2012) in a liquor store by the Daily Mail, alcohol before 12pm is just never a good idea. Is he drinking away his sorrows? Uh-oh.