Halle Berry was honoured with a top prize when she attended the 13th Annual Costume Designers Guild Awards last night (22.02.11). 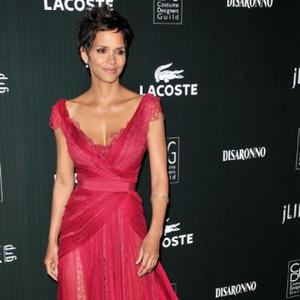 Looking stunning in a sheer red Elie Saab haute couture gown, she picked up the Lacoste Spotlight Award in recognition of her professional excellence and appreciation of the importance of costume design.

The award was presented to the 44-year-old star by actor Samuel L. Jackson, who said: "My dear friend and colleague. Don't you love her name? It's like a stanza of music."

Other big winners of the night included 'The King's Speech', which scooped the prize in the Excellence In Period Film category, and 'Black Swan' gaining an award for Excellence In Contemporary Film.

The event, which took place at the Beverly Hilton Hotel in Los Angeles, was attended by a host of stars including Ashton Kutcher, Demi Moore and Claire Danes.

Halle has recently made headlines with her custody battle over her daughter with her ex boyfriend Gabriel Aubry.

Last week a judge granted her the right to take two-year-old Nahla to New York with her, while she films upcoming movie 'New Year's Eve'.