What are you going as this year?

Halloween is less than 24 hours away, and along with all the witches, vampires and zombies that will be taking over the streets and parties, we reckon there'll be a few TV and film inspired looks out there. Here are eight franchises that we hope will be on every Halloween lover's mind - plus the most scary character of all.

Bill Skarsgård as Pennywise in 'It'

It - While dressing up as a killer clown on Halloween may get you into trouble with the cops after the influx of dangerous street pranks last year, we don't think everyone will be able to resist attempting their own incarnation of Bill Skarsgård's Pennywise from the new film adaptation of Stephen King's novel. After all, it is the most popular horror flick of the year.

The Meerkats and Asiatic lionesses at London Zoo were just a few of the animals found getting into the Halloween spirit over the past few days. The meerkat mob were seen showing off their foraging skills by delving into a creepy cauldron full of crickets and climbing in and out of their own toothy-grinned jack O 'lantern. The trio of Asiatic lionesses (Panthera leo persica) Heidi, Indi and Rubi pawed at pumpkins scented with blood in their 'Land of the Lions' home - rolling the carved creations around before settling down to lick them clean. London, United Kingdom - Wednesday 26th October 2016 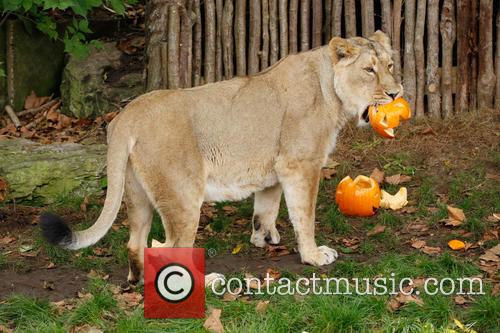 By Holly Williams in Bizarre / Weird Wonderful on 02 November 2015 Continue reading: What Should You Watch This Halloween? 2015 Horror Films Ranked

What's your worst fear? Being attacked in the street by a mad axeman? Being burgled in the dead of night by armed raiders? How about being chased by a giant spider on your way to your evening gym session? You might think that's unlikely, but it fooled these guys! A Polish prank genius by the name of Sylwester Wardega has teamed up with his pet pooch Chica in a bid to pull off the ultimate terrifying trick on unsuspecting passers-by. Dressing him up in a rather realistic (at first sight) tarantula costume (which probably cost Wardega painfully little considering how much fun he managed to get out of it) and littering various dark corners of the town with makeshift cobwebs and bloody body parts, this mischief merchant set up hidden cameras in order to capture the priceless reactions of unwitting victims.

By Michael West in Lifestyle / Showbiz on 29 October 2013

Halloween costumes for 2013? Don't look to the celebrities for inspiration.

It's that time of year again guys. We compile a list of the most bizarre celebrity Halloween costumes of 2013. We're not choosing the best costumes here - oh no - we're choosing the most ridiculous. Sort of the worst, but the best worst ones. You get the picture.

We anticipated that Breaking Bad Halloween costumes would be huge this year and so we've been disappointed with the celebrity effort on that front. Where are all the Jesse Pinkmans, the Walter Whites and the Gus Frings? Maybe they'll emerge later in the week but at the minute we're getting an influx of Miley Cyrus costumes, something we're not happy about at all.

We start with the frankly bizarre Paris Hilton, who still appears to be living life as a sweet sixteen birthday girl. She's 32. This year, she spent $5,000 on several ensembles for the annual Halloween party at the Playboy mansion on Saturday (October 26, 2013). Amongst them was the teddy bear outfit Miley Cyrus twerked in at the MTV Video Music Awards. She also put together a little Katy Perry 'Roar' jungle outfit.

People putting dogs in weird costumes. Probably viral or something.

As we approach the annual triduum of Halloween, thoughts turn to impressing friends and strangers with imaginative costumes. You’re around two years too late for the Breaking Bad hazmat getup, and don’t even think about donning ‘a scar’ and calling yourself a ‘zombie’. I mean, this little fella didn't even make the cut

But while you’re mulling over which costume to spend too much money on, spare a thought for domesticated canines, who, during late October/early November, have their door knocked on three billion times, see their owners wield knives and douse themselves with weird tasting and potentially fatal red sh*t, and then hide under the sofa while World War III explodes rather floridly into the sky. 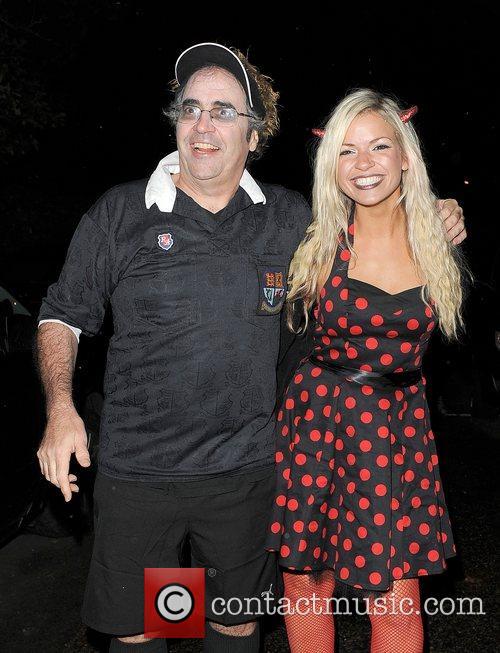