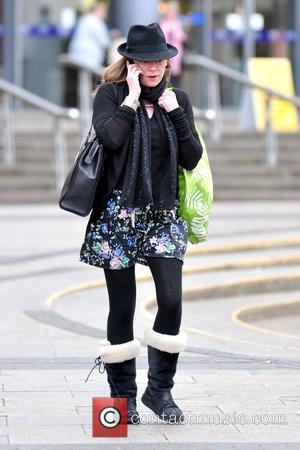 Picture: Hannah Waterman chats on her mobile phone outside The Lowry Theatre where she is performing in 'Calendar Girls' Los Angeles California - 10.02.10

Hannah Waterman, the British television actress best known for playing 'Laura Beale' on 'Eastenders', has given birth to her first child. Waterman announced she was expecting a baby-boy with 'The Bill' star Huw Higginson in January, reports the UK's Daily Mirror.
Hannah began dating Huw last summer after the actor reportedly left the mother of his two children after 14 year of marriage. The actress had gone through her own personal problems - splitting from her husband and fellow 'Eastenders' actor Ricky Groves. Earlier this year, Waterman revealed, "I've been friends with Huw for 10 years. We first met when he played my pervy landlord in EastEnders.We wanted a family, but didn't expect it so quickly". She also revealed the pregnancy triggered an earlier diagnosis of diabetes, adding, "It can be dangerous, which means this baby will probably be the only child I can have". She was heavily criticised for her 2009 exercise Dvd 'Hannah Waterman's Body Blitz', with television presenter Coleen Nolan branding her weight loss techniques "unhealthy" and "unrealistic".
Hannah Waterman is the daughter of 'Minder' star Dennis Waterman and his second wife PATRICIA MAYNARD.