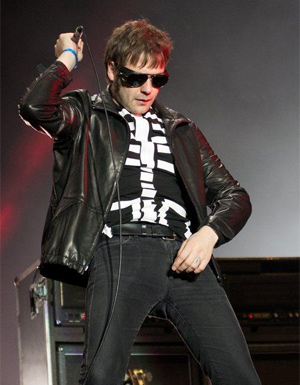 Two of the world's biggest acts are ready to rock at Hard Rock Calling, held at the brand new iconic home of Queen Elizabeth Olympic Park, London. Kasabian make their UK festival exclusive headlining Saturday 29 June, while Bruce Springsteen & The E Street Band return to finish what they started on Sunday 30 June 2013. Paul Weller, Miles Kane, Kodaline, The Black Crowes, Alabama Shakes, The Cribs, Klaxons and Tribes are all confirmedin what is set to beone of the biggest Hard Rock Callings to date. Tickets are on sale at 9am on Friday 8 March 2013.

Kicking off what will be the first show at Queen Elizabeth Olympic Park, London since the London 2012 Games, one of Britain's biggest and most contemporary bands Kasabian are announced in a UK festival exclusive, making their debut appearance at Hard Rock Calling on Saturday 29 June. The multi-million selling BRIT award-winning band are ready to get crowds rocking with hits including 'Processed Beats', 'Club Foot', 'L.S.F', 'Empire', 'Shoot The Runner', 'Fire', 'Underdog', 'Days Are Forgotten and festival favourite 'Velociraptor' spanning their four studio albums.

Bruce Springsteen & The E Street Band are confirmed for Sunday 30 June in what marks a third epic headline performance at the festival. Back for some unfinished business, Bruce Sprinsteen & The E Street Band will bring The Wrecking Ball Tour to Hard Rock Calling. Expect a high energy all out rock performance that goes down in history with some of their biggest and most loved hits plus a few surprises and special guests.

Modfather Paul Weller joins Kasabian as special guest on Saturday 29 June, while US rockers the The Black Crowes and Alabama Shakes both join the Sunday 30 June bill. Some of the best of British indie, Miles Kane, Kodaline, The Cribs, Klaxons and Tribes are all confirmed for Saturday 29 June, with many more additions still to be announced across the weekend.

"Last year, Bruce Springsteen & The E Street Band made international news and history when their Hard Rock Calling encore with Sir Paul McCartney was unceremoniously cut short due to a noise curfew at Hyde Park. This summer we are giving Bruce and the band the opportunity to finish what they started and make history again with celebrated performance at Hard Rock Calling," said CEO of Hard Rock International, Hamish Dodds. "Additionally, we are looking forward to christening Queen Elizabeth Olympic Park with a Saturday lineup of some of Britain's hottest talent, including headliner Kasabian, Paul Weller and more."

Earlier this year it was announced that Hard Rock Calling will be held at a brand new home, Queen Elizabeth Olympic Park, London providing a dazzling open-air live music experience this summer. It offers a chance to experience the excitement of watching the best in popular music at one of London's most iconic sites.

"Queen Elizabeth Olympic Park is proving to be a fantastic draw for big names and we are delighted to be adding legends like Bruce Springsteen and the E-Street Band and Kasabian to this summer's line up. We are on track to deliver a great summer, a top visitor destination and a great legacy for east London."

Many more acts and details still to be unveiled.

About Hard Rock Calling:
Hard Rock Calling has fully established itself as one of the UK's must see outdoor music events. The stage at Hard Rock Calling attracts some of the biggest musicians and bands in the world, with previous headliners including The Who, Paul McCartney, Eric Clapton, Neil Young, Bruce Springsteen & The E Street Band, Stevie Wonder, Aerosmith, Peter Gabriel, Pearl Jam, The Police, The Killers, Rod Stewart and Bon Jovi.