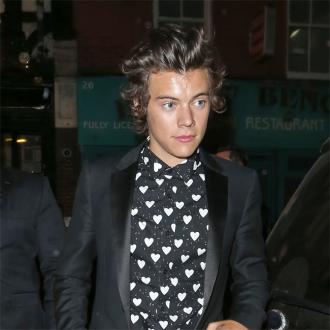 The One Direction hunk gatecrashed the 26-year-old model's hen party at London's Groucho Club on Saturday night (30.11.13) while dressed as a member of the 90s band Hanson in a long blonde wig.

A source told The Sun newspaper: ''Harry rocked up to the club with Nick Grimshaw and quickly stole the show with his get-up.

''Mmmbop was requested from the DJ and Harry launched into a sexy dance for Poppy and her mates, who were in fits of giggles. He was entertaining everyone for the evening.''

The 19-year-old singer was keen not to leave out Poppy's sister Cara Delevingne - who he was romantically linked to earlier this year - and jumped on her lap after finishing up his cheeky dance routine.

Alexa Chung, Georgia May Jagger, Jaime Winstone and Sienna Miller were also present during the bash and turned heads with their retro-themed costumes.

In the early hours of Sunday morning (01.12.13), Harry decided to ditch his Hanson impersonation and searched through the fancy dress box at the private members' club, before pulling out a Nelly the Elephant head and leaving the venue with his new furry prop.

Meanwhile, there was no sight of his new rumoured love interest model Daisy Lowe, whom he has reportedly been going on secret dates with after being introduced through mutual friends.